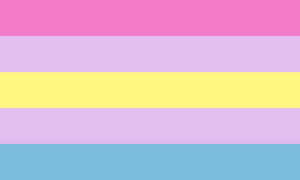 Aporagender (from Greek apo, apor "separate" + "gender"[1]) is a nonbinary gender identity and umbrella term[2] for "a gender separate from male, female, and anything in between while still having a very strong and specific gendered feeling" (that is, not an absence of gender).[3]

Hyaenahart designed the aporagender pride flag, which is shown at right.[6] "Blue & Pink have been put on either end of the flag to show that you feel your gender is 'away' from these two colours, stereotyped as blue being masculine and pink being feminine. Purple to represent as feeling between male and female. Yellow to represent how the gender is nothing like being female, male or both, but is also placed close enough to blue, purple and pink to show that it’s still connected strongly to some sort of specific gender. Yellow also represents how it’s a non-binary identity."[7]

As an umbrella term

Difference from other genders

Retrieved from "https://nonbinary.wiki/w/index.php?title=Aporagender&oldid=3041"
Categories:
Hidden category:
Cookies help us deliver our services. By using our services, you agree to our use of cookies.