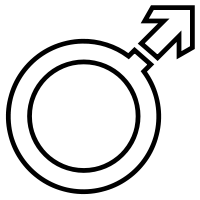 Eunuch symbol. It is a male symbol with the extending arrow having been "sliced through".

A eunuch generally means a person who was assigned male at birth, and who was castrated. Though many historical eunuchs were made so without their consent, eunuchs often occupied a nonbinary gender role (often called third gender), and some of them were what we now call transgender. Then, as now, some people are eunuchs by choice, and some of them see this as a nonbinary gender identity. Nowadays eunuchs are recognised more and more as being part of the transgender spectre.

Since this is not Wikipedia (see Wikipedia's article on eunuchs), this page should focus on eunuchs as a nonbinary identity, people throughout history who have become eunuchs by choice, and eunuchs in the context of nonbinary gender.

Usually a eunuch is one who has been castrated either by at least taking away the gonads (testicles), called orchiectomy, sometimes including the removal of the scrotum, or by taking away the gonads as well as the phallus (penis), called emasculation. Eunuchs have existed for virtually all of written history: the earliest record of them was in Sumer, in the 21st century BCE.[1][2]

Before the creation of more elaborate kinds of gender-validating surgeries, nonbinary and other transgender people in many cultures were also eunuchs by choice. Traditionally, Hijras were eunuchs, and many of them today prefer to be so, even when they have the option to get the kind of surgeries that transgender women can get today. Some other identities that have often been eunuchs include Ashtime and Gallae.

Eunuch is not necessarily a nonbinary or transgender identity. Many cultures around the world also had a tradition of making someone into a eunuch without that person's consent. The purpose of this was to ensure that they couldn't have children with a nobleman's concubines, or to give them a higher singing voice (Castrati). These eunuchs usually identified as men. Eunuch is also not necessarily a surgical process. In some ancient writings, sometimes "eunuch" means a person who hasn't been castrated, but who can't or won't have children, because of being sterile, intersex, gay, asexual, or just not interested.

Some nonbinary people who identify as neutrois are or wish to become eunuchs, or label themselves as eunuchs.[3]

Retrieved from "https://nonbinary.wiki/w/index.php?title=Eunuch&oldid=25163"
Category:
Hidden category:
Cookies help us deliver our services. By using our services, you agree to our use of cookies.