Template:Information Required Gender-neutral language, also called gender-inclusive language, is the practice of using words that don't give an idea of someone being female or male. For example, the word "fireman" gives the idea that a person in that work is male. An offer for a job as a "cleaning lady" gives the idea that only a woman should do the job. The gender-neutral alternatives are to say "fire fighter" and "janitor," respectively. Then it is easier to see that these jobs can be done by a person of any gender. Gender-neutral language is important in feminism, because changing the way that people talk can help make sexist ideas less common. For example, the sexist idea that some jobs should only be done by people of certain genders.

Gender-neutral language is also important to many people who have nonbinary gender identities. For one reason, this kind of talk helps fight against nonbinary erasure, which is the common but wrong and sexist idea that there are only two genders. Since gender-neutral language doesn't give the idea that a person is male or female, it can also apply to people who identify as other genders, outside of the gender binary. Nonbinary people can ask to be talked about in this way.

This section has its own article at Gender neutral language in English.

French, like other romance languages, traditionally has only two grammatical genders: masculine and feminine. Additionally, according to the standard language rules, masculine is always treated as the generic gender, meaning that a mixed-gender group will always be referred to in masculine (and not in feminine, unless everyone is a woman). These rules have been established over the centuries by men and male-led institutions like the Académie Française. In 1675, talking about the grammar of the French language, abbot Dominique Bouhours stated "When both genders meet, the most noble must prevail". French inclusive language refuses such rules, and feminist and queer activists work hard to try and rid French of its sexism. They have developed over the last few decades different ways to adapt the French language to be more inclusive of women and gender minorities.

However, there is not one single way to speak inclusively in French, but rather, there are a wide variety of tools and workarounds one can use to adapt one's language. It should also be noted that the "mainstream" inclusive language used by an ever growing number or people, journals and institutions aims at being inclusive of women. These changes, albeit fairly minimal, are still very controversial with certain people. The problem of a language inclusive of the nonbinary community hasn't yet reached the mainstream debate and remains mostly confined within queer and feminist circles.

Finally, as it is not officially recognised, it is important to mention that inclusive French might not be accepted in contexts where formal language is expected; such as exams, language proficiency tests, official documents etc.

These pronouns are considered neopronouns and are used to refer to nonbinary people or someone whose gender is unknown. They are not formally recognised and are not usually used in what could be called "mainstream inclusive French". There use is mostly limited to nonbinary people, feminist and queer circles as well as the internet. Because nothing is codified, there are almost no limits on what can be used, and a wide variety of options have been created and adopted by different people. Due to these circumstances, it is common for French gender non-conforming people to accept different sets of pronouns/neopronouns, or any pronouns/neopronouns. The lists below are not exhaustive.

This section has its own article at Gender neutral language in German.

Italian, as with other romance languages, presents challenges for inclusivity of nonbinary genders in that grammatically there only exists masculine and feminine genders. Although it descended from Latin, which had 3 genders (masculine, feminine and neuter), it has since lost its neuter form. Nevertheless, different approaches may transform the way Italian is spoken to make it more gender inclusive.

Italian has masculine and feminine grammatical genders, although some nouns ending in -e (singular)/ -i (plural) hint at a suggested neutral form not dissimilar from gender ambiguous nouns in Spanish (ex. el estudiante and la gente both end in -e even though they are gendered masculine and feminine). One idea therefore may be to use these endings for nouns to neutralize language. Possible noun endings that could work:

The Irish language (Gaeilge) presents some challenges to creating a gender neutral way of speaking. Every noun is gendered in either masculine or feminine grammatical gender, with accompanied binary forms for adjective agreement, pronouns and prepositions.

Nouns in Irish are categorized into masculine and feminine grammatical genders, which in turn dictate the way nouns behave with the definitive articles "an" and "na", initial consonant mutations and the formation of adjectives. Gendered nouns correspond to gendered pronouns as stand ins (ex. masculine, Sé, or feminine, Sí). Nouns do seem to possess standard endings for the most part, although there are some exceptions. Irish nouns have 4 grammatical cases: nominative/accusative, vocative, genitive and prepositional.

Masculine endings include the following

(it could be argued since -eacht and -acht occur as both feminine and masculine nouns that there is some gender ambiguity/neutralized gender, and perhaps these could be neuter endings for nouns)

Pronouns in standard Irish Gaelic are as follows:

The conjunctive form is used when the subject follows the verb. Standard Irish sentence structure is Verb Subject Object or VSO. Forms corresponding to the non-standard pronouns above include Siú,Duí and Cí.

The disjunctive form is used when the pronoun isn't the subject or the subject pronoun doesn't follow the verb. Forms corresponding to the non-standard pronouns above include Iú,Dhuí and Chí

Emphatic form is used to emphasize pronouns and is similar to the English use of italics to give words a bit more weight. Conjunctive and Disjunctive forms exist within the Emphatic form. Forms for the nonstandard pronouns include Suisa,Duísean and Císa (emphatic conjunctive) and Uisa, Dhuísean and Chísa (emphatic disjunctive).

In addition to these other forms of pronouns, The irish language has "prepositional pronouns", which create specific forms of gender pronouns depending on the type of preposition. Bear in mind the table below contains only the neutral singular versions of these pronouns---Likewise, these are proposed pronouns and non-standard forms, some of them inspired by the neuter gender endings found in Old Irish.

There are words that would be categorized in binary genders but could be used as neutral sounding words.

Latin is essentially a historical language, but it is still used by a small but vibrant community worldwide. It starts to have some LGBT terminology, like "homosexualitas"/"homophylophilia" (homosexuality), "propensio sexualis" (sexual orientation), "intersexualitas" (intersexuality), "identitas generis" (gender identity) etc., but modern neologisms remain a tricky issue in the language. Also, Latin traditionally makes extensive use of generic masculine, which is thus difficult to avoid. If one is ready to use terms that didn't exist in the classical language (or had a different meaning then), but have nevertheless been in use for centuries (e.g. "persona", "individuum"), it is possible to use a mix of terms of different grammatical genders and add other words as appositions aligned in gender in order to convey gender neutrality, e.g. "homo filius", "persona filia" and "individuum filium" in order to express "child" (in the sense of offspring). For "enby", "nebinium" has been proposed.[1]

Norwegian is a language with three grammatical genders: masculine, feminine, and neuter, but they have nothing at all to do with real gender. For example, "kvinne", which means "woman", "kusine", which means a female cousin, "jente", which means "girl", and "dronning", which means "queen", are all or can be masculine nouns. There are also a few odd words, such as romkamerat, an inclusive word meaning room-mate. The word "kamerat" means male friend.

Other Types of Relationships[edit | edit source]

Unlike English, Russian has three grammatical genders: masculine, feminine, and neuter. While neuter allows some nonbinary people adjectives to use, this gender is not ideal for nonbinary people for grammatical reasons. The first is that most neuter nouns decline like masculine nouns. The second is that neuter animate nouns do not change in the accusative case (though there are rare neuter animate nouns that change in the accusative plural; see "лицо" in Wiktionary), while both masculine and feminine nouns do. This implies that people using neuter words are not human.

This section has its own article Gender neutral language in Spanish. 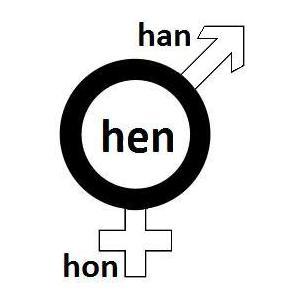 A symbol of Swedish female, male, and neutral pronouns.

Traditionally, the word den has been used as a gender neutral pronoun and remains widely used today. However, depending on the context, the word den can also mean it leaving it unsatisfactory as a gender neutral pronoun for many who do not wish to be seen as comparable to an inanimate object. Since the 1960s, the person pronoun hen has become increasingly popular and will, in 2015, be added for the first time to Svenska Akademiens Ordlista (the Swedish equivalent to France's Dictionnaire de l'Académie française). Its usage, however, remains somewhat contraversial and is vigorously opposed by some.

The object form of hen is sometimes just hens. It is very individual.