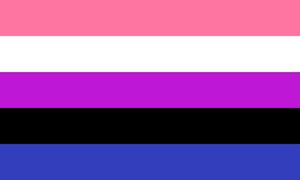 Genderfluid flag. From top to bottom, the colors represent a sequence of genders: female, genderless, both female and male, all other genders, and male.[2]

The earliest extant entry for "gender fluid" in the Urban Dictionary was added in 2007.[3]

In 2010, the Gender-Fluid community was created on LiveJournal.[4]

In 2015, Dictionary.com added an entry for "gender-fluid,"[6] which it defined as an adjective meaning "noting or relating to a person whose gender identity or gender expression is not fixed and shifts over time or depending on the situation." It listed as synonyms genderfluid, gender fluid, and gender-flexible.[7]

Usually, gender fluidity happens by itself, so that a person feels like, say, a girl at a certain time, rather than choosing to be a girl at a certain time.[8] Some genderfluid people find that no outside or inside things tend to influence their gender identity to change. They find that their gender fluidity is unpredictable and happens randomly. Other genderfluid people find that their gender changes depending on the situation and is influenced by inside or outside sources. Some move from one gender to the next on a regular cycle, resembling a lunar cycle, or synchronizing with their menstrual cycle. Other genderfluid people are sometimes able to use their willpower to guide their gender to change in a way and/or at the time that they want it to.

In 2012, Case and Ramachandran gave a report on the results of a survey of genderfluid people who call themselves bigender who experience involuntary alternation between female and male states. Case and Ramachandran gave this condition the name "Alternating gender incongruity (AGI)." Case and Ramachandran made the hypothesis that gender alternation may reflect an unusual degree (or depth) of hemispheric switching and the corresponding suppression of sex appropriate body maps in the parietal cortex. They "hypothesize[d] that tracking the nasal cycle, rate of binocular rivalry, and other markers of hemispheric switching will reveal a physiological basis for AGI individuals' subjective reports of gender switches... We base our hypotheses on ancient and modern associations between the left and right hemispheres and the male and female genders."[9][10][11] Case and Ramachandran believe that when bigender people feel a change between their gender identities, it may have to do with a change in how they use parts of their brains. The gender change might also have to do with a natural body cycle, specifically, a valve in the nose that changes sides every two days (the nasal cycle). However, this idea is still only a hypothesis, and more study is needed to confirm it.

Gender dysphoria, or feeling painfully uncomfortable about how one's body and social role don't match one's gender, isn't a requirement in order to be genderfluid. Each person is different, experiencing gender fluidity in their own way. Some genderfluid people experience gender dysphoria at times or all the time. Some want to change their bodies and some take a physical transition to do so, which may include hormones or surgery. Others don't choose to transition because any change they make to their body would only feel right to them when they were in a certain gender and would feel wrong in others. Yet others have a difficult time planning their transition path, because their feelings change about what they want.[12][13]

Some genderfluid people ask to be called by a different name[13] and pronouns depending on what gender they feel at a certain time. For people who switch between only two genders, this can mean switching between two names. These may be feminine and masculine versions of the same name[14] or names that don't sound similar at all.[15] They may also take a gender-neutral name that works for them at any time, either in addition to these names, or instead of them.

Genderfluid people usually don't think of themselves as having alters. Most genderfluid people feel like the same person all the time, with the same likes and dislikes but a different gender. However, some genderfluid people switch between specific personas as they change genders, and each persona has their own likes and dislikes. This is different from Dissociative Identity Disorder (DID), which is a disorder characterized by dissociation and the existence of alters. DID is caused by traumatic abuse that happens early in childhood and almost always exists alongside PTSD or cPTSD. Gender fluidity is not caused by abuse and is not more common in people with PTSD or cPTSD.

Retrieved from "https://nonbinary.wiki/w/index.php?title=Genderfluid&oldid=5111"
Category:
Cookies help us deliver our services. By using our services, you agree to our use of cookies.