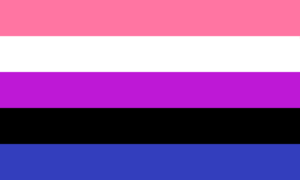 Genderfluid flag. From top to bottom, the colors represent a sequence of genders: female, genderless, both female and male, all other genders, and male.[1]

Mentrual cycle and its effect on gender fluidity

Genderfluid people usually don't think of themselves as having alters. Most genderfluid people feel like the same person all the time, with the same likes and dislikes but a different gender. However, some genderfluid people switch between specific personas as they change genders, and each persona has their own likes and dislikes. This is different from Dissociative Identity Disorder (DID), which is a disorder characterized by dissociation and the existence of alters. DID is caused by traumatic abuse that happens early in childhood and almost always exists alongside PTSD or cPTSD. Gender fluidity is not caused by abuse and is not more common in people with PTSD or cPTSD.

Retrieved from "https://nonbinary.wiki/w/index.php?title=Genderfluid&oldid=4392"
Category:
Cookies help us deliver our services. By using our services, you agree to our use of cookies.