In south Asian countries including India, Indonesia, Pakistan, and Bangladesh, the Hijra are people who were assigned male at birth and who have a feminine gender expression. This is a very ancient tradition of a nonbinary gender role (often called "third gender"). The Hijra in India alone may number as many as 2,000,000.[1]

In some countries today, Hijra are legally recognized as a gender other than female or male.

• Laxmi Narayan Tripathi (1978-present), also known as Laskhmi, is a Indian transgender rights activist. She is also a dancer and actress. She was the first trans person to represent Asia Pacific at the UN back in 2008. She founded the Astitiva organization in 2007 to support sexual minorities. When talking about her gender, she said “Am I both man and a woman? Am I neither man nor woman? I am a hijra so I can access both states of being.” Laxmi had participated in documentaries about transgender people such as “Between the Lines: India’s Third Gender”, “Project Bolo”, “Queens! Destiny of Dance”. She co-wrote her biography, called “Red Lipstick”, in 2016. 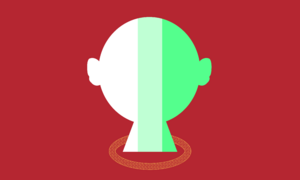 The first known hijra flag was created in 2016 by a user under the handle "HijrAnon".[8] HijrAnon wrote of the flag's symbolism:

Samira's hijra pride flag.
Another hijra flag was created in 2018 by a hijra on Tumblr named Samira, who wrote:

Retrieved from "https://nonbinary.wiki/w/index.php?title=Hijra&oldid=23993"
Categories:
Cookies help us deliver our services. By using our services, you agree to our use of cookies.