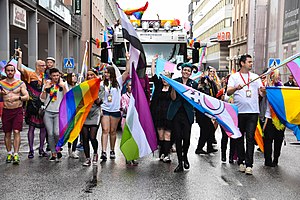 Since the use of the term LGBT became widespread, other minorities have been accepted into the community and added to the end of LGBT acronym in various combinations. These include: Intersex, Pansexual, Asexual, Aromantic, Queer, Questioning, Two-spirit, and others. This results in a variety of acronyms, such as LGBTQ, LGBTQ2, LGBTIQAP, LGBTQQAP, etc. Since the string of letters can get very long, some writers just imply them by writing a plus sign on the end, such as LGBT+, LGBTQIA+, or LGBTQQAP+. The A, when it is added, can refer to asexual and aromantic, as well as agender. However, there has been some debate whether the A stands for allies. This comes from the belief that the term "ally" used to describe a closeted LGBT+ community member who wanted to be a part of the community while also protecting themselves from their unsafe or unsupportive environment.

Because the ever-longer acronym can become cumbersome to say, some propose rearranging the letters into different acronyms. Others propose an entirely different acronym that summarizes the commonalities of LGBT+ identities, rather than listing them, such as:

Queer is a word with a complex history. Some people choose not to use an acronym such as LGBT, and instead use the word "queer" as a collective term for all identities which are not heterosexual and/or not cisgender. "Queer" may also be used for orientations and genders that are difficult to define in more specific terms.

Beginning around the 1980s, the word "queer" began to become a political reclamation. Flyers like one circulated in the 1990 New York Pride Parade proclaimed queer as a word indicative of a rejection of heteronormative standards.[9]

In the early 1990s, the academic discipline of queer theory developed. This comes from the use of "queer" as a political statement and a gender stance, which places queerness as against assimilation. The field of queer theory not only looks into LGBT history, but the ramifications of queer theory itself.[10][11]

For many people even today, "queer" represents a rejection of assimilation and respectability politics, whereas rejection of the word queer is associated with assimilationist politics. Queer is used by activists that seek broader societal changes that reach the most disenfranchised LGBT people.[12][13]

However, queer is still used as a slur against LGBT people.[14][15] The degree to which queer is considered offensive varies by region and by generation. In 2011, one blogger, themself queer and genderqueer, called it the slur of choice in the UK among "queer bashers," making it necessary to "fight tooth and nail" for their right to call themself both in the 1990s.[16] As with other hate speech, it is very common[citation needed] among LGBT+ people for the word to be a trigger for post-traumatic flashbacks of memories of violence, harassment, and abuse.

Even so, the World Professional Association for Transgender Health (WPATH) Standards of Care V7 listed genderqueer as one of many specific terms used by people outside the gender binary in 2011.[17] In response, non-gendered activist Christie Elan-Cane spoke against queer being applied to per, calling the use of "gender queer" in the WPATH standards inappropriate, offensive, and a barrier to mainstream acceptance.[18] Others, calling themselves genderqueer, praised the WPATH inclusion as validating their identities, calling Elan-Cane's complaints generational rather than universal.[16]