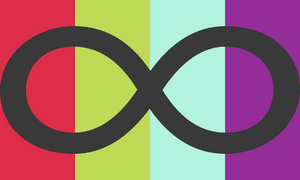 Neurogender flag created by aflutteringlaney. The colored bars are to represent the spectrum of different neurotypes and gender identities that neurodivergent individuals have. The infinity symbol is to represent neurodiversity.[1]

Affectugender (coined by witchtao[3]) is defined as a gender that is affected by one’s neurodivergency especially fluctuating moods, e.g. feeling like a boy during depressive episodes and feeling more like a demigirl during happy/manic episodes. This is under the neurogender and xenogender umbrella categories of gender.

Autigender or Autismgender (coined by autismgender and esperancegirl) is defined as "autism as part or whole of gender identity; a gender that can only be understood in context of being autistic;" when your gender experience is influenced by or linked to your autism.

Bordergender or Borderfluid (coined by izayaorihahaha[6]) is defined as a fluctuating gender experienced exclusively by people with BPD. A gender identity lacking a firm grasp on ones identity, while still experiencing gender, to varying degrees, but having trouble pinning it down to just one label or identity. Having the sense of grasping at labels as much as possible to describe a gender we keep questioning because we keep second guessing our sense of selves and, consequentially, our sense of gender.

Caedogender flag created by Kiloueka.[7] The flag design was created to look like the colors representing certain genders were being "cut out" by the gray bars.

Commogender (coined by transmomoi[9]) is defined as a feeling that one is definitely not cisgender, but is unable to define what their gender is due to mental exhaustion. May be used as commoboy/commogirl if the person identifies with a binary gender for convenience.

Corugender or Flashgender (coined by gmaora[11]) is defined as a gender identity that changes during and around flashbacks.

Fascigender (coined by autisticjakeenglish[13]) is defined as a gender experience largely related to an autistic special interest.

Foggender flags created by Kiloueka.[14] The flag design was created to resemble fog masking over the colors representing certain genders.

Foggender (coined by autisticlynx[15]) is defined as a gender which is close to a certain gender, but cannot be directly pinpointed due to brainfog (a lack of concentration or wakefulness associated with ADHD, fibromyalgia, depression, etc.) Foggender is a kind of neurogender.

Illusogender flag created by Kiloueka and funCatty.[16] The graphic on the flag was designed to look like the famous rabbit/duck illusion.

Ludogender flag created by pridearchive.[17] The stripe meanings are: Blue: Masculinity, Purple: Nonbinary, Pink: Femininity, White: Lack of gender , The circle in the middle represents one’s “core” gender. The stripes are vertical and mirrored to represent the mirroring aspect of ludogender.

Narkissisgender flag created by Kiloueka.[18] The flag design was created to resemble a narcissus flower aka a daffodil.

narkissisgender (coined by furryhell) is defined as an egotistical gender, viewing itself in a high position and wanting and/or needing praise. should only be used by those who have narcissistic personality disorder. "Gender" can be replaced with fluid, boy, girl, xirl, boi, nonbinary, enby, nb, etc. The synonym of this word that can be used by people who don't have narcissistic personality disorder is egoisgender.

Nesciogender or Nesciōgender flag created by crypticprinxe.[19] The flag design was created with mint green colors to represent neurodivergency and the circle in the center is meant to place other flags inside.

nesciogender or nesciōgender (coined by princetzimisce[20]) is defined as a gender one is not completely sure of due to one’s neurotype disallowing a clear understanding of the concept, but has a vague sense of what it could be; i.e. nescioboy, nescioagender, etc.

pendogender is defined as never being satisfied with your gender no matter how well it fits due to self-doubt, causing one to compulsively search and seek out something that fits even better. Gender perfectionism. For neurodivergent folks only, coined with people with anxiety disorders, OCD, and OCPD in mind.

posigender or negagender: A feeling that one’s gender is defined by or influenced by positive (posigender) or negative (negagender) symptoms of their schizophrenia. Keywords: Schizophrenia

systemgender A gender which is defined as a sum of all the genders within a multiple or median system. A nonbinary gender experienced by members of a multiple and/or median system. Other systems can also come up with names. (i.e. headmates all have different nonbinary genders but are looking for something to describe the gender of the system as a whole.) Keywords: DID, multiples,

systemfluid Genders that change depending on who’s fronting. Keywords: DID, multiples

traumatagender, traumatgender, trautgender, or trauatgender. (Coined by furryhell). A gender that varies; it can change a lot, it could be unknown, it could just be there, it could be nonexistent, etc. Whatever it is, it was based from intense trauma. Should only be used by those who have experienced or are going through what they consider intense trauma. Keywords: PTSD, trauma

vaguegender, or gendervague (coined by neurodivergentkin and strangledlove[23]) is defined as a gender identity that is highly influenced by being neurodivergent, and feels undefinable or partly definable because of one’s neurodivergence.

Virgender flag created by pridearchive.[24] The meaning of the flag colors are: Red: To symbolise the stress/difficulty in having a gender, White: An amalgamation of all genders Black: Genderlessness. The red stripes lighten as one goes down the flag to symbolise how one’s stress is causing their gender to get weaker and weaker until it goes to white and the individual is relieved of the stress of keeping up with one’s gender. The white transitions to grey and then to black to symbolise the complete lack of gender.

Xumgender (coined by ademcshades[28]) is defined as never being satisfied with your gender due to constant self-doubt or identity issues, causing one to compulsively search and seek out something that fits as perfect as possible–to find “the gender” or “the one truth”–though one will never be found due to one’s neurotype, because words will never be able to describe it, and/or its own properties paradox itself. This frequent anxiety and doubt even causes this gender to feel imperfect to the individual.

Retrieved from "https://nonbinary.wiki/w/index.php?title=Neurogender&oldid=3398"
Categories:
Hidden category:
Cookies help us deliver our services. By using our services, you agree to our use of cookies.