There are many other historical events about genders outside the binary, which have existed for all of written history, going back to Sumerian and Akkadian tablets from 2nd millennium BCE and 1700 BCE,[4][5][6] and ancient Egyptian writings from 2000-1800 BCE.[7][8] This section focuses only on historical events about people who call themselves by the word "nonbinary."

Since 2012, the International Nonbinary Day has been celebrated each 14th of July, with the aim to celebrate and focus on nonbinary people, their successes and contributions to the world and their issues. Katje of "Fierce Femme's Black Market," the person who proposed it, chose that date because it is exactly between International Men's Day and International Women's Day.[9][10]

In 2014, the social media site Facebook began to allow users to set their profiles as any of 56 genders, one of which was called "nonbinary."[17]

In 2017, in the USA, the state of California passed the 2017 Gender Recognition Act "to ensure that intersex, transgender, and nonbinary people have state-issued identification documents that provide full legal recognition of their accurate gender identity."[18][19]

In 2018, in the USA, Washington state began to allow "X" gender markers on official documents[20], with the law stating that Also in 2018, well-known cartoonist and songwriter Rebecca Sugar came out as a nonbinary woman. 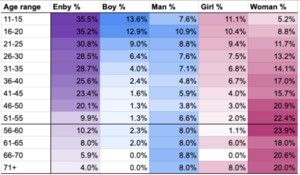 Table displaying the percentages of respondents sorted by their preferred word.[23]

Retrieved from "https://nonbinary.wiki/w/index.php?title=Nonbinary&oldid=33155"
Categories:
Cookies help us deliver our services. By using our services, you agree to our use of cookies.