Transfeminine (also written trans-feminine or trans feminine, and sometimes abbreviated to transfem or transfemme[note 1]) describes a transgender person (generally one who was assigned male at birth) who seeks to present femininely, or to transition to look more feminine, or who identifies as more female than male. The label "trans-feminine" can be considered either a gender identity, a gender expression, or both. It is an umbrella term that includes trans women who don't consider themselves nonbinary, and nonbinary feminine people.[1][2] Some examples of genders that transfeminine individuals may identify as include:

One web-site about nonbinary gender identity explains how someone can be both trans-feminine and nonbinary: 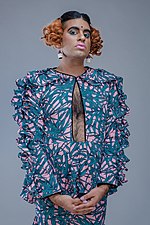 Retrieved from "https://nonbinary.wiki/w/index.php?title=Transfeminine&oldid=34045"
Categories:
Cookies help us deliver our services. By using our services, you agree to our use of cookies.