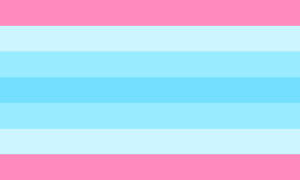 Transmasculine, sometimes abbreviated to transmasc, is an umbrella term that describes a transgender person (generally one who was assigned female at birth), and whose gender is masculine and/or who express themselves in a masculine way. [1][2] Transmasculine people feel a connection with masculinity, but do not always identify as male. Transmasculine people can include, but are not limited to: trans men, demiboys, multigender people, genderfluid people and nonbinary people, as long as they identify with masculinity. Transfeminine is the feminine equivalent of transmasculine.

We would appreciate information about when transmasculine was coined, or sources showing its earliest known usage.

The DC Area Transmasculine Society, or DCATS, is a trans-led nonprofit organization that was founded in 2000 as a monthly support group and has since started offering a variety of services, like a binder exchange program.[3][4] This organization doesn't take credit for coining the word "transmasculine," suggesting it was around before the year 2000.[5]

In 2010, on an essay written on his blog Rants and Ramblings, titled What’s in a Word?: Crafting Transmasculine, S. Leigh Thompson, who was president of the TransMasculine Community Network, presents the result of his work with organizers and advocates to craft a definition for the term "transmasculine." The definition suggested by Leigh was "any person who was assigned female at birth but feels that is an incomplete or incorrect description of their gender." He mentions, at the end of this blog post, that the first version of the essay had been published in 2006.[6]

"Transmasculine" was one of the identities that became available in the gender selection on Facebook in 2014.[8]

Notable people who consider their identity to be outside the Western gender binary, and who describe themselves as transmasculine include:

There are many more nonbinary/genderqueer characters in fiction. The following are only some of those characters who are specifically called "transmasculine"/"transmasc", either in the canon, or by their creators.

Retrieved from "https://nonbinary.wiki/w/index.php?title=Transmasculine&oldid=29701"
Categories:
Cookies help us deliver our services. By using our services, you agree to our use of cookies.