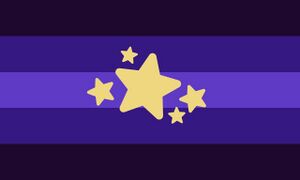 Cosmicgender flag created by Kiloueka at pride-flags.deviantart.com.[15] The flag design was created to aesthetically represent looking up at space (specifically the Big Dipper) through a telescope.

Retrieved from "https://nonbinary.wiki/w/index.php?title=Xenogender&oldid=22540"
Categories:
Cookies help us deliver our services. By using our services, you agree to our use of cookies.