This article was written in collaboration with the original creator of this term.

A term first introduced and and originaly created by the Tumblr user studydatesonrainydays in November 2020. This term falls somewhat under the Aesthetigender umbrella. They describe it as "A feeling of detachment from gender as a whole. A gender identity outside of the gender binary and non-binary. A complete lack of connection between a person and their gender."[1] The defenition found on Tumblr is not the current defenition of the term. Studydatesonrainydays has helped writing this article and clarified/refined the definition of the term arceogender. This page contains the current, updated definition.

The flag: a Green, Yellow and Orange stripe 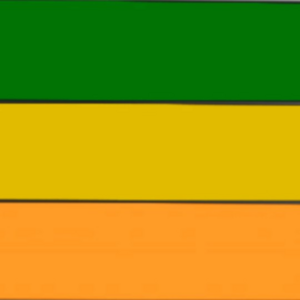 Green - Represents the safety and stability of having a term to describe yourself with, also representing a safe place in which you can fully express yourself.

Yellow - Represents the opportunity to express yourself outside of any gender expectations from both binary and non-binary genders. Also represents the happiness of finding yourself.

studydatesonrainydays also wrote "Furthermore, yellow is a color associated with raising awareness. I am trying to form a gender identity that exists out of every box we know of- even outside the box for people outside the box."[2]

Orange - Represents the creativity and especially the creative freedom of gender expression within this gender identity. Also represents this gender term being independent and separated from both the binary and non-binary gender spectrum.

In June 2021 studydatesonrainydays has refined the arceogender flag, see on the right.

Due to the complete lack of gender in oneself, individuals who identify as arceogender may be heavily influenced by aesthetics, movies, books, music, content creators or similar things in regards to gender expression. Someone who identifies as arceogender may also use i.e. an aesthetic to define their identity. This lack of gender identity cannot be described through binary or non-binary terms. A person who identifies as arceogender is not feminine, masculine, or gender-neutral. However, arceogender can be a fluid/fluctuating identity. Due to the infinite amount of possibilities to expres oneself through this identity, some people may fluctuate between different ways of expressing their gender (through aesthetics, books, movies, music, ...).

About the new flag:

"The old flag was created on the fly in a few minutes. It doesn't include the lack of gender or the infinte possibilities to express oneself. The defintion of the term arceogender has changed and the flag should undergo a change as well." - studydatesonrainydays

The updated version shows slightly different shades of the original colors. A thin, dark grey stripe encased by black stripes sepperates each color and a white stripe encased by light grey ones was added in the middle of the yellow stripe. The original definitions of the green and orange stripes have not changed. 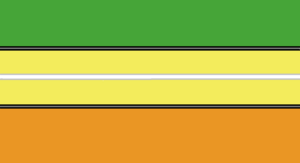 The added/updated colors and their meaning:

Black - Represents the complete lack of gender, also represents the "death" or abandonment of any previously set gender roles and boundries in expressing oneself.

White - Represents the infinte ways to express and experience a lack of gender.

Yellow - The yellow color has been desaturated to match the yellow star on the aesthetigender flag. Along with the previously stated meaning, the Yellow also repsesents the connection to aesthetigender identities and expressing onseselfs lack of gender through aesthetics.

Retrieved from "https://nonbinary.wiki/w/index.php?title=Arceogender&oldid=29518"
Categories:
Hidden category:
Cookies help us deliver our services. By using our services, you agree to our use of cookies.