From Nonbinary Wiki
Jump to navigation Jump to search
Translate this page
Other languages:

Bigender, bi-gender, or sometimes dual-gender/dual-gendered, is a gender identity under the multigender, nonbinary, and transgender umbrella terms. Bigender people have two different specific gender identities, either at the same time, or at different times. The latter is a form of genderfluid identity, and may involve only two distinct genders, or it may involve "shades of gray between the two."[1] The two genders of a bigender person can be the two binary genders, female and male. This is what people usually assume bigender means. However, some people who identify as bigender have a different pair of genders. For example, their two genders might be female and neutrois. Or the two genders might be both nonbinary, such as agender and aporagender. Bigender is recognized by the American Psychological Association (APA) as a subset of the transgender group.[2]

In the 1980s, a trans organization called the Human Outreach and Achievement Institute defined "bigenderist" as a type of androgyne, with the latter being defined as "a person who can comfortably express either alternative gender role in a variety of socially acceptable environments."[3][4]

In 1992, Donna Mobley wrote in The Femme Mirror magazine:

A trans man named Gary Bowen defined "bigendered" as "having two genders, exihibiting[sic] cultural characteristics of male and female roles" in his 1995 Dictionary of Words for Masculine Women".[6]

A 1997 paper concerning the "gender continuum" in International Journal of Transgenderism noted that "a person who feels or acts as both a woman and a man may identify as bi-gendered." The paper also described individuals who were "genderblended", being both binary genders but either "more man than woman" or "more woman than man".[7]

In a 2010 encyclopedia, bigender is listed as a type of "androgyne" gender: "Androgyne identities include pangender, bigender, ambigender, nongendered, agender, gender fluid, or intergender."[9]

In 2012, Case and Ramachandran gave a report on the results of a survey of genderfluid people who call themselves bigender who experience involuntary alternation between female and male states. Case and Ramachandran gave this condition the name "Alternating gender incongruity (AGI)." Case and Ramachandran made the hypothesis that gender alternation may reflect an unusual degree (or depth) of hemispheric switching, and the corresponding suppression of sex appropriate body maps in the parietal cortex. They said that "we hypothesize that tracking the nasal cycle, rate of binocular rivalry, and other markers of hemispheric switching will reveal a physiological basis for AGI individuals' subjective reports of gender switches... We base our hypotheses on ancient and modern associations between the left and right hemispheres and the male and female genders."[10][11][12] These doctors think that when bigender people feel a change between their gender identities, it might have to do with a change in how they use parts of their brains. The gender change might also have to do with one of the cycles that everyone has in their body, specifically, a valve in the nose that changes sides every two days (the nasal cycle). This is only a hypothesis, meaning that it is an interesting idea that doesn't have proof for now.

In July of 2014, two bigender pride flag designs by Tumblr user no-bucks-for-this-doe were posted on the blog "pridearchive".[14] The first flag has seven horizontal stripes: two shades of pink on the top, followed by a lavender stripe, white middle stripe, another lavender stripe, and two shades of blue on the bottom. The second flag is the same except that the middle stripe is a gradient of white-to-grey. The color meanings were given thusly:

In later years, many alternate bigender pride flags were created after allegations that no-bucks-for-this-doe was transphobic and predatory.[15][16][17]

In 2015, an entry for "bigender" was added to Dictionary.com,[18] defined as "a person who has two gender identities or some combination of both."[19]

In 2017, bigender was one of the 37 gender options added to the dating network Tinder.[20] 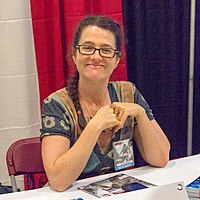 Retrieved from "https://nonbinary.wiki/w/index.php?title=Bigender/en&oldid=31939"
Categories:
Hidden categories:
Cookies help us deliver our services. By using our services, you agree to our use of cookies.