Aporagender (from Greek apo, apor "separate" + "gender"[1]) is a nonbinary gender identity and umbrella term[2] for "a gender separate from male, female, and anything in between while still having a very strong and specific gendered feeling" (that is, not an absence of gender).[3] 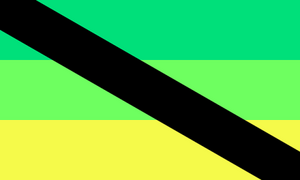 An alternative of aporagender flag, proposed to due to discontent with the original flag.

Hyaenahart designed the aporagender pride flag, which is shown at right.[6] "Blue & Pink have been put on either end of the flag to show that you feel your gender is 'away' from these two colours, stereotyped as blue being masculine and pink being feminine. Purple to represent as feeling between male and female. Yellow to represent how the gender is nothing like being female, male or both, but is also placed close enough to blue, purple and pink to show that it’s still connected strongly to some sort of specific gender. Yellow also represents how it’s a non-binary identity."[7]

In 2018 an alternate aporagender flag was proposed due to discontent with the original flag. [8] Proposed by Mod Lune of the blog wedontcareaboutyourbinary, this flag was not intended to be a replacement to the original but rather an alternative for people who were also discontent with the original or merely preferred the newer version. Lune felt the original flag focused too heavily on binary gender "between-ness" and was too close to the bigender flag. "Yellow and green are two colors that are equally strongly associated with non-binary identity that stands completely separate from a pink/blue female/male point of reference. Teal refers here to the validity of aporagender identities that may SEEM similar to maleness/masculinity or femaleness/femininity, but are distinctly their own separate gender feelings. I chose the black diagonal stripe in opposition to white, which frequently references lack, absence or void; here, I’m using black to signify the presence of a specific gender feeling. Its diagonal orientation refers to the existence of these genders on a plane completely distinct from the binary."

As an umbrella term[edit | edit source]

Difference from other genders[edit | edit source]

Retrieved from "https://nonbinary.wiki/w/index.php?title=Aporagender&oldid=29676"
Categories:
Hidden category:
Cookies help us deliver our services. By using our services, you agree to our use of cookies.