The slang term "drag" refers to the wearing of clothing of a different sex, gender, or both; or, an exaggerated characterization of one's current gender or sex. "Drag" may be used as a noun as in the expression in drag, or as an adjective as in drag show.[1]

Since this wiki isn't Wikipedia (see Wikipedia's article on drag), this page should focus on aspects of drag that are specifically relevant to people who are nonbinary, or at least to help disambiguate drag from other kinds of gender nonconforming clothing and transgender transition of gender expression.

The origin of the term is uncertain;[2] the first recorded use of drag in reference to actors dressed in women's clothing is from 1870.[3] The use of "drag" in this sense appeared in print as early as 1870[4][5] but its origin is uncertain. One suggested etymological root is 19th-century theatre slang, from the sensation of long skirts trailing on the floor.[6] Drag queens are typically gay men, but there are drag queens of all different sexual orientations and genders,[7] including trans women who perform as drag queens[8][9][10] (sometimes termed trans queens),[11] such as Monica Beverly Hillz[8][9] and Agnes Moore, known by her stage name Peppermint,[10] and cisgender women[12] who do, sometimes termed faux queens.[13] Drag queens' counterparts are drag kings, women who dress in exaggeratedly masculine clothing; men who dress like drag kings are sometimes termed faux kings.

Some drag queens may prefer to be referred to as "she" while in drag and desire to stay completely in character.[14] Other drag performers say they are indifferent to which pronoun is used to refer to them. In drag queen RuPaul's words, "You can call me he. You can call me she. You can call me Regis and Kathie Lee; I don't care! Just so long as you call me."[15]

Drag kings are performance artists, typically cisgender women, who dress in masculine drag and personify male gender stereotypes as part of an individual or group routine.[16] They may be lesbian, bisexual, transgender, genderqueer, or otherwise part of the LGBT community. They may also be straight. A typical drag show may incorporate dancing, acting, stand-up comedy, and singing, either live or lip-synching to pre-recorded tracks.[17] Drag kings often perform as exaggeratedly macho male characters,[18] portray marginalized masculinities such as construction workers, rappers, or they will impersonate male celebrities like Elvis Presley, Michael Jackson, and Tim McGraw.[19]

In the late 1800s and early 1900s, several drag kings became British music hall stars, and British pantomime has preserved the tradition of women performing in male roles. Starting in the mid-1990s, drag kings started to gain some of the fame and attention that drag queens have known.[20][21]

Another term for a drag queen is female impersonator.[22] Although this is still used, it is sometimes regarded as inaccurate, because not all contemporary drag performers are attempting to pass as women. Female impersonation has been and continues to be illegal in some places, which inspired the drag queen José Sarria to hand out labels to his friends reading, "I am a boy", so he could not be accused of female impersonation.[23] American drag queen RuPaul once said, "I do not impersonate females! How many women do you know who wear seven-inch heels, four-foot wigs, and skintight dresses?" He also said, "I don't dress like a woman; I dress like a drag queen!".[24]

Drag queens are sometimes called transvestites, although that term also has many other connotations than the term drag queen and is not much favored by many drag queens themselves.[25] The term tranny has been adopted by some drag performers, notably RuPaul,[26] and the gay male community[27] in the United States, but it is considered offensive to most transgender and transsexual people.[28]

Many drag performers refer to themselves as drag artists, as opposed to drag queens, as contemporary forms of drag have become nonbinary.[29][30]

In the drag queen world today, there is an ongoing debate about whether transgender drag queens are actually considered "Drag Queens". This subject is argued because Drag Queens are defined as a man portraying a woman. Since transgender queens are now transitioned into women, many people do not consider them drag queens because they are no longer men dressing as women.

Drag Kings are often cisgender women who assume a masculine aesthetic. However this is not always the case, because there are also transgender male drag kings as well as cisgender male kings ("bio kings"). Bio kings or bio queens are people who perform as their own AGAB through a heightened or exaggerated gender presentation.[31][32]

A faux queen or bio queen[33] or female-bodied queen, on the other hand, is a cisgender woman while performing in the same context as traditional (men-as-women) drag and displaying such features as exaggerated hair and makeup (as an example, the performance of the actress and singer Lady Gaga during her first appearance in the 2018 film A Star Is Born.[34] 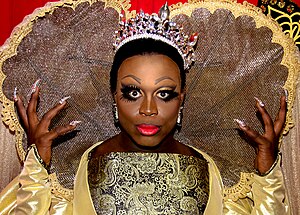 Drag can be an opportunity for people to express their identity's "gender complexity".[35] Although many drag performers are cisgender or are binary trans people, some notable drag performers who have come out as nonbinary include:

Retrieved from "https://nonbinary.wiki/w/index.php?title=Drag&oldid=32953"
Categories:
Hidden category:
Cookies help us deliver our services. By using our services, you agree to our use of cookies.