Libragender is a gender identity where you feel mostly agender, but with a particular connection to another gender. The term 'libragender' gets its name from the star sign Libra, which is an equal scale. This represents the bifeelings of the agender gender identity and any other gender(s), although the feeling of being agender overweighs the feeling of being the other gender(s) and they are not equal. Libragender people are in the range of feeling 1-49% of a connection to another gender, with the other percentage being agender. 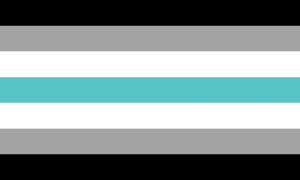 This is the libramasculine flag. Both black and white represent the complete absense of gender. The blue in the middle represents masculinity or the male gender.

Libramasculine is a gender identity where a person experiences little attachment to being masculine/male, but mostly agender. It's similar to demiboy, but is more specific, in that it's agender and male, with agender outweighing male, while demiboy is partially male, partially another gender(s).

Librafeminine is a gender identity where a person experiences little attachment to being feminine/female, but mostly agender. It's similar to demigirl, but is more specific in that it's agender and female, with agender outweighing female, while demigirl is partially female, partially another gender(s).

Libragender was coined on Tumblr on or before 10 July 2014 by the user libragender, who has since deactivated their account.[1]

Retrieved from "https://nonbinary.wiki/w/index.php?title=Libragender&oldid=19521"
Categories:
Hidden category:
Cookies help us deliver our services. By using our services, you agree to our use of cookies.