Otherkin are a subculture of real people who identify as not entirely human. Each individual comes up with their own reasoning for how and why they are otherkin, and what kind of being they are.[1] Most otherkin believe they are nonhuman in a spiritual way, or otherwise somehow non-physical, such as from reincarnation, psychology, trans-species dysphoria, or metaphor.[2] All otherkin know that they are physically human, in that they look like humans, were born like humans, and live in the way that most humans do. However, some otherkin believe their own bodies are different from most human bodies, such as having genes from supernatural ancestors.[3] Joseph P. Laycock, assistant professor of religious studies at Texas State University, considers the belief to be religious,[4] but most otherkin firmly disagree with being classified as a religion. This is because otherkin are not a formal organization with leaders or members, they do not agree on any cosmological or spiritual beliefs (some otherkin do not believe in spirituality at all), and otherkin independently come to the conclusion that they are other than human, sometimes without even knowing anybody else felt that way. By definition, otherkin is not a religion, and is not similar to a religion.[1]

Otherkin largely identify as mythical creatures,[5] with others identifying as creatures from fantasy or popular culture. Examples include: angels, demons, dragons, elves, fairies, aliens,[6][7][8] and cartoon characters.[9] Many otherkin believe in the existence of a multitude of parallel universes, and their belief in the existence of supernatural or sapient non-human beings is grounded in that idea.[10]

With regard to their online communities, otherkin largely function without formal authority structures, and mostly focus on support and information gathering, often dividing into more specific groups based on kintype.[10] There are occasional offline gatherings, but the otherkin network is mostly an online phenomenon.[10]

Some otherkin claim to be especially empathic and attuned to nature.[7] Some claim to be able to shapeshift mentally or on the astral plane, meaning that they experience the sense of being in their particular form, while not changing physically.[2][11]

The therianthrope and vampire subcultures are related to the otherkin community, and are considered part of it by most otherkin, but are culturally and historically distinct movements of their own, despite some overlap in membership.[2]

"Otherkin" as an adjective was defined in the Middle English Dictionary (1981) as "a different or an additional kind of, other kinds of".[12] The earliest recorded use of the term otherkin, in the context of a subculture or people who identify as other than human, appeared in July 1990. The variant otherkind was recorded as early as April 1990.[2] The word "otherkind" was initially coined from the word "elfinkind", to refer to non-elf others who joined the communities.[13]

The otherkin community has origins that go back to the 1960s, in Pagan spirituality groups of those who called themselves elves.[13] The word "otherkin" was created in 1990 by a group of people who identified as elves, to include people who identify as beings other than elves.[13] The otherkin subculture grew out of the elven online communities of the early-to-mid-1990s.[14] The oldest Internet resource for otherkin is the Elfinkind Digest, a mailing list started in 1990 by a student at the University of Kentucky for "elves and interested observers". Also in the early 1990s, newsgroups such as alt.horror.werewolves[15] and alt.fan.dragons on Usenet, which were initially created for fans of these creatures in the context of fantasy and horror literature and films, also came to have participants who identified as mythological beings.[2][16]

Otherkin is an identity, but not a gender identity. Much of the otherkin community is made up of folks who are transgender, genderqueer, or nonbinary. This has always been so, ever since the 1960s.[13] For this reason, the otherkin community has a tendency to be accepting of anyone who is transgender, genderqueer, or nonbinary.

That said, some otherkin do think of their gender identity as part of, influenced, or best described with their otherkin identity. For example, a nonbinary person who has decided that the best way to describe their gender identity is to say, "My gender is elf." (There are also people outside of the otherkin community who use similarly non-gender-related concepts and archetypes to describe their nonbinary genders; see xenogender.) The word "men" can mean people who are male, or it can mean humans, so some otherkin-- especially the earliest of them, the Silver Elves-- have enjoyed playing with denying that they are either of those things. An anecdote told before 2000 by the Silver Elves, who are an otherkin group which formed in the 1960s, and includes many transgender and gender nonconforming people, goes like this:

"We were early at the party [...] when a beautiful woman arrived who was quite accustomed therefore of getting her way with men. She sat near them very quietly at first then suddenly she sighed and said, 'It sure would be nice if some man built us a fire.' [...] Then Zardoa, looking to Feral said, 'Do you see any men about?' And Feral Faun peering around said, 'Not a one.' The woman gaped astonished while we faerie folke chuckled quietly among ours'elves [sic]."[17]

The equivocation and denial of both "human" and "male" in this anecdote is more than wordplay. Zardoa had also written that he had spent much of his youth "trying very hard to be a 'man' even though he knew in his heart that he was not a 'man', could never be a 'real man' [...] and succeed in the world of men but never felt accepted there," until a spiritual experience in meditation made him realize that "elf" was a better description of who he was at heart than either meaning of "man."[18] The Silver Elves were one of the earliest otherkin groups, dating back to the 1960s. Many of them were transgender as well as considering themselves as elves or other mythological beings, so much so that when they released a music album, they described it as trans-elven rock.

Some otherkin who are transgender describe themselves as "trans species," saying that their gender and the otherkin aspects of their identity feel connected and similar.[19] 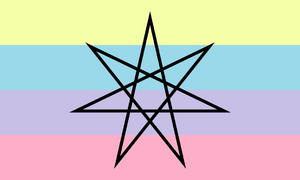 Kingender pride flag, for individuals whose gender identity is closely related to their otherkin type. Term and flag created by Tumblr user aroacehawkeye. The stripe color meanings follow the conventions of other pride flags: yellow for genderlessness, blue for male, purple for mixed female/male nonbinary gender identities (androgyne, etc), and pink for female.[20] The seven-pointed star has been a symbol for otherkin since the 1990s, and for elf people since the 1960s.[2]

Retrieved from "https://nonbinary.wiki/w/index.php?title=Otherkin&oldid=32935"
Categories:
Cookies help us deliver our services. By using our services, you agree to our use of cookies.