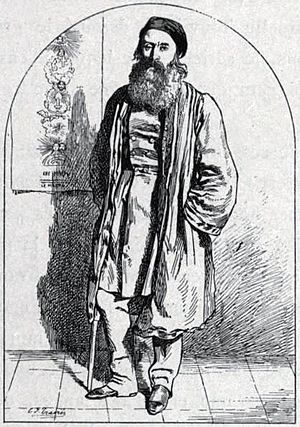 The Mapah, drawn by contemporary cartoonist Charles-Joseph Traviès de Villers in 1883. The poster on the wall behind him may show the five phases of the world about which he preached, ending in androgynous Adamism at the bottom.

Simon Ganneau (sometimes spelled Gannot), born around 1806 and died in Paris on March 14, 1851, is a French mystic or illuminated man who, under the title of Mapah, presented himself as the prophet of a new religion, Evadaism (l'Evadaïsme). He wore a combination of feminine and masculine signifiers: a beard, a working man's blouse, and a woman's mantle. He called himself by the title "the Mapah," which was a combination of the words mater (mother) and pater (father). He created a mystical religion he called Evadaisme, meaning "Eve-Adam-ism." This taught that the next phase of human development would be androgyny, coming from the femininity of Mary-Eve marrying the masculinity of Christ-Adam. Evadaisme favored socialism, and condemned sexist traditions, such as taking the surname of one's father and not one's mother. Though the Mapah was poor, he was well-educated, and spoke eloquently. He preached to working-class men, and to women who were sex workers.[1][2] The Mapah taught Éliphas Lévi (1810 – 1875), inspiring the latter to become interested in the occult. Lévi then become the best-known occultist of the nineteenth century. Through Lévi, the occult practice of Western ceremonial magic owes much of its origins to the Mapah.[3][4]

Born around 1806, Simon Ganneau was the son of a hatter. When the latter died (which occurred before 1832), Simon interrupted his studies and squandered his legacy on the gaming tables in the capital. He then established himself as a phrenologist and set up his practice on Boulevard Bonne-Nouvelle. After losing his partner (one of his "patients" who had left her husband for him), he fell victim to a deep despair which soon turned into mysticism.

It is in a context of romantic religiosity illustrated by the lawsuit brought against the followers of Saint-Simon and of “new Christianity” that Ganneau founded his own religion in 1838.[5]

Engraving from one of the Mapah's brochures (1838), representing the androgyne Èvadam constituted by the marriage of Mary-Eve ​​and Christ-Adam.

He had baptized it Evadaism (l'Evadaïsme) or Evadism (Evadisme),[6] a word combining the names of Adam and Eve, in order to advocate the fusion of the male and female principles. In the name of this principle, Ganneau joined the Saint-Simonians in their demand for equality between men and women. In the same spirit, he took the title of Mapah (fusion of Mater, "mother", and Pater, "father" or, more prosaically, of "mama" and "papa"). This "androgynism" was based on a cosmogony according to which the "embryogenesis" of the planet had passed through four phases-- "igneism", "mineralism", "vegetalism," and "animalism"-- and was to result in "Adamism."

The Mapah's disciples gathered around their prophet's pallet, in his sculpting workshop on Île Saint-Louis. Among the more or less convinced followers, the friends of Ganneau or the young romantics attracted by a mixture of utopian socialism and progressive spirituality, we found Théophile Thoré, Félix Pyat, Pierre-Jules Hetzel, Jacques-Germain Chaudes-Aigues, Flora Tristan, Joseph Sobrier, Alphonse-Louis Constant and Alphonse Esquiros.[7]

With the help of his “apostle” Louis-Charles Caillaux (1815-1896, cousin of Eugène Caillaux), Simon Ganneau distributed numerous brochures (including the Ark of the New Alliance) in order to spread his new religion.

According to the contemporary occultist Éliphas Lévi, Ganneau also claimed to be Louis XVII reincarnated.[8]

One of the eccentric celebrities of Paris, Simon Ganneau was mentioned in particular by Alexandre Dumas,[9] who had known him before his conversion to Evadaism, as well as by Alphonse Karr,[10], Traviès, Grandville, and Louis Reybaud.[11]

In the end, Ganneau was trying to make a living as a sculptor or art dealer. He died in poverty in 1851, leaving a young widow (who lived to be 101) and a five-year-old son whom Théophile Gautier took under his wing,[12] the orientalist Charles Simon Clermont-Ganneau (1846-1923).[13]

Retrieved from "https://nonbinary.wiki/w/index.php?title=Simon_Ganneau&oldid=20506"
Category:
Cookies help us deliver our services. By using our services, you agree to our use of cookies.