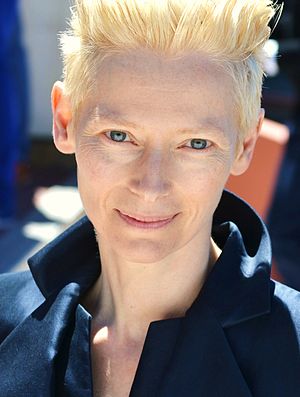 Swinton at the 2013 Cannes Film Festival

Katherine Mathilda "Tilda" Swinton, born 5 November 1960 (age 53), is a British actor most noted in the nonbinary community for her androgynous roles in Orlando and as genderless angel Gabriel in Constantine.

She won the Academy Award for Best Supporting Actress for her performance in Michael Clayton in 2007.

"That whole idea of transformation is at the heart of what I’m interested in as a performer and not least through the idea of gender. It’s a very personal matter. I can categorically say that as Orlando does in the film: Yes, I’m probably a woman."[2]