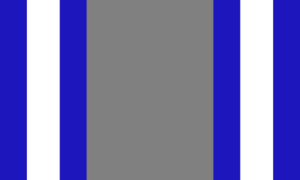 A Tumtum pride flag designed by Tumblr user tumtum_and_androgynos in 2018 CE. White and blue symbolize Judaism, and gray for genderlessness.

Classical Judaism recognizes six categories of sex/gender, instead of the male/female gender binary from modern Western culture. Jewish law (called halacha) recognises gender ambiguity, and has done so throughout Jewish history.[1] This ambiguity is defined according to physical presentation (or lack thereof) and primary and secondary sexual characteristics. Then Jewish law assigns six gender roles to these six sexes, each with distinct prohibitions and required duties. According to Rabbi Elliot Kukla, these six are:[2]

The above six categories of gender are important to consider whenever considering gender in classical Jewish texts, such as the Hebrew Bible, rather than misinterpreting them in terms of the modern Western gender binary.

Retrieved from "https://nonbinary.wiki/w/index.php?title=Translations:Gender-variant_identities_worldwide/95/en&oldid=32149"
Cookies help us deliver our services. By using our services, you agree to our use of cookies.