Egogender (derived from Latin "ego", meaning "I") or charagender or [name]gender, are terms for a gender which is so personal to someone that they can only describe it as "me"-gender.[1] Thus, no two egogender individuals have the same gender, although they have the same gender label. One may also use (name)gender with their name inserted for a synonymous term. This can be considered a type of xenogender, since it is not related to the concepts of female or male. It can also be specified further, as egoguy, egogirl, or egononbinary.[2] When combined with genderflux it becomes egoflux or charaflux.[3] Some people express their gender identity as being simply their identity from early childhood:

"Not all children fit neatly into a male or female gender identity, trans or otherwise. For some children, the sense of being 'both' or 'neither' best describes their reality. [...] Children who see themselves as 'neither' will often speak of how regardless of whether they're with a group of boys or girls, they feel like they don’t fit. This is not necessarily a sad feeling. They just see the kids around them and know that they are not 'that.' Kids in this category often appear androgynous, and will frequently answer the question 'are you a boy or a girl' by saying their name ('I'm Devon') or by identifying themselves as animals. When asked to draw self portraits, they will portray themselves as rainbows, or unicorns, or another symbol of their choosing." [emphasis added] 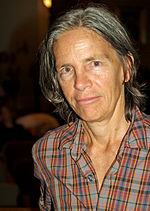 There are many more notable people who have a gender identity outside of the binary. The following are only some of those notable people who specifically say they are egogender, charagender, [name]gender, or who describe themselves in a way that fits the description of egogender.

There is more information about this topic here: nonbinary gender in fiction

There are many more characters in fiction who have a gender identity outside of the binary. The following are only some of those characters who are specifically called by the words egogender, charagender, or similar wording, either in their canon or by their creators.

Retrieved from "https://nonbinary.wiki/w/index.php?title=Egogender&oldid=20748"
Categories:
Hidden category:
Cookies help us deliver our services. By using our services, you agree to our use of cookies.