The Society of Fa'afafine in American Samoa official logo created and designed by Ammon Fepuleai. 2014. 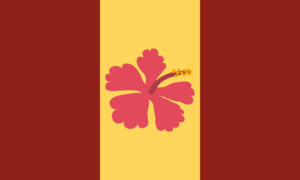 A fa'afafine pride flag created in 2016.

Fa'afafine are people who identify themselves as having a third-gender or nonbinary role in Samoa, American Samoa and the Samoan diaspora. A recognized gender identity/gender role in traditional Samoan society, and an integral part of Samoan culture, fa'afafine are assigned male at birth, and explicitly embody both masculine and feminine gender traits in a way unique to Polynesia. Their behaviour typically ranges from extravagantly feminine to conventionally masculine.[1]

A prominent Western theory, among the many anthropological theories about Samoans, was that if a family had more boys than girls or not enough girls to help with women's duties about the house, male children would be chosen to be raised as fa'afafine;[2] although this theory has been refuted by studies.[3]

It has been estimated that 1–5% of Samoans identify as fa'afafine.[4] Te Ara: The Encyclopedia of New Zealand estimates that there are 500 fa’afafine in Samoa, and the same number in the Samoan diaspora in New Zealand;[5] while according to SBS news, there are up to 3000 fa'afafine currently living in Samoa.[6]

The word fa'afafine includes the causative prefix fa'a–, meaning "in the manner of", and the word fafine, meaning "woman".[7] It is cognate with linguistically related words or social categories in other Polynesian languages, such as the Tongan fakaleiti (also fakafefine), the Cook Islands Māori akava'ine, the Hawaiian and Tahitian māhū (literally in the middle), the Māori whakawāhine, the Niuean fiafifine (also fakafifine), the Tokelauan fakafāfine, the Tuvaluan pinapinaaine, the Gilbertese binabinaaine, and the Wallisian fakafafine.

The FTM or female-to-male equivalent in Samoa are known variously as fa'atane, fa'atama, and fafatama. Ultimately, Western terms like gay, transgender, FTM, etc., do not align exactly with Samoan terms like fa'afafine, fa'atane, etc., which have meaning within the fa'asamoa traditional cultural systems of Samoa.

The Samoan slang word mala (or "devastation" in the Samoan language) is in less frequent use for fa'afafine, as it arose from fundamentalist influenced homophobia and transphobia.[8]

The history of fa'afafine, through the elisions of colonialism, is difficult to trace. Nafanua, the female warrior and chief of Samoan early history, is often held up as an icon of fa'afafine and fa'atane. In Dolgoy's recorded interviews with fa'afafine from the 1980s, we know that Johnny Fruitcake was a popular fa'afafine during the American military occupation of Samoa in World War II, and that Anita (Tony Schwenke) was the founder of Hollywood, a tailoring shop and house of refuge for fa'afafine in Apia in the 1960s–1970s.[9] Beginning in the 1980s, through the Samoan diaspora, fa'afafine began having a presence in contemporary global cultures.

Fa'afafine are known for their hard work and dedication to the family, in the Samoan tradition of tautua or service to family. Ideas of the family in Samoa and Polynesia are markedly different from Western constructions, and include all the members of a sa, or communal family within the fa'amatai family systems.[10]

Fa'afafine, as a third gender, have sexual relationships almost exclusively with men who do not identify as fa'afafine, and sometimes with women, but apparently not with other fa'afafine.[11] This third gender is so well-accepted in Samoan culture that most Samoans state that they have friendship relationships with at least one fa'afafine; it is, however, not totally accepted in other communities, such as some Catholic groups and traditional leaders. Traditionally, fa'afafine follow the training of the women's daily work in an Aiga (Samoan family group).[1][12]

Fa'afafine state that they "loved" engaging in feminine activities as children, such as playing with female peers, playing female characters during role play, dressing up in female clothes, and playing with female gender-typical toys. This is in contrast to women who stated that they merely "liked" engaging in those activities as children. Some fa'afafine recall believing they were girls in childhood, but knew better as adults. In Samoa, there is very seldom ridicule or displeasure towards a biologically male child who states that they are a girl. For instance, one study showed only a minority of parents (20 per cent) tried to stop their fa'afafine children from engaging in feminine behavior. Being pushed into the male gender role is upsetting to many fa'afafine. A significant number stated that they "hated" masculine play, such as rough games and sports, even more than females did as children.[1]

The Society of Fa'afafine in American Samoa or "Le Sosaiete o Fa’afafine i Amerika Samoa" (S.O.F.I.A.S) is an organization designed to foster collaboration between the fa'afafine and the LGBTQI+ communities in both American Samoa, the Asia Pacific region, and the world.[13] SOFIAS describes itself as an organization dedicated to balancing both Samoan values with western influences and aims to promote a positive attitude toward the Samoan fa'afafine community. Now known as Miss SOFIAS, the Miss Island Queen Pageant has been held in Pago Pago, American Samoa, since 1979.

The Samoan Faafafine Association Incorporated (S.F.A.) of independent Samoa, based in Apia, has been active for over a decade. It works closely with government, local churches, and youth organizations, supporting community projects for the faafafine community, but also for elders and youth in Samoa. SFA has been active on the international level working with the United Nations and Pacific regional NGO's, on behalf of the fa'afafine, transgender, and LGBT communities of the Pacific Islands. They also been active working with media developing a more equitable representation of fa'afafine by media.[14]

There has been legislative activity initiated in Samoa by the Samoa Faafafine Association, with faafafine lawyers Alex Su'a and Phineas Hartson Matautia, on issues of LGBT rights in Samoa. Their efforts to repeal homophobic and transphobic laws inherited from the British and New Zealand colonial administrations have met with partial success.[15] Marriage equality for fa'afafine is still unlawful in Samoa; and despite marriage equality legalization in the U.S., it is still not recognized in the US Territory of American Samoa.

Retrieved from "https://nonbinary.wiki/w/index.php?title=Fa%27afafine&oldid=22413"
Categories:
Hidden category:
Cookies help us deliver our services. By using our services, you agree to our use of cookies.