Third gender, or third sex, is a concept in which individuals are categorized, either by themselves, by their society, or by outsiders to their society, as not fitting into the Western ideas of binary gender and heterosexual roles. The phrase "third gender" has been used for a wide variety of meanings: intersex people whose bodies do not fit Western medical concepts of binary sex, hundreds of indigenous societal roles as described (and often misrepresented) by Western anthropologists (including indigenous identities such as south Asian hijras, Hawaiian and Tahitian māhū, and Indigenous identities now called Two-Spirits),[1] transgender people who are nonbinary, homosexual people even in Western societies,[2][3][4] and women who were considered to be gender-nonconforming because they fought for women's rights.[5]

The term "third gender" has been criticized by some. For example, in a 2014 thesis on Inuit gender complexity, archaeologist Meghan Walley wrote that "We must move away from interpretations that position nonbinary gender as a third element or an anomaly and instead embrace the critical and challenging work that will be necessary to construct understandings of complex gender systems that [don't] assume binary gender as a precondition for nonbinary gender."[8]

Intersex people are born with sex characteristics, such as chromosomes, gonads, or genitals that, according to the UN Office of the High Commissioner for Human Rights, "do not fit typical binary notions of male or female bodies".[9] A sex and gender distinction is not universal, and Peletz's description of gender as designating biological variations as well as cultural practices is not unique. In a study of arguments that intersex people fit into a third gender classification, intersex scholar Morgan Holmes argues that much analysis of a third sex or third gender is simplistic:[10]

Like non-intersex people, some intersex individuals may not identify themselves as either exclusively female or exclusively male, but most appear to be men or women.[11][12][13] A clinical review suggests that between 8.5–20% of people with intersex conditions may experience gender dysphoria,[14] while sociological research in Australia, a country which offers a nonbinary legal sex classification ("X"), shows that 19% of people born with atypical sex characteristics selected an "X" or "other" option, while 52% are women, 23% men and 6% unsure.[15][16] Alex MacFarlane is believed to be the first person in Australia to obtain a birth certificate recording sex as indeterminate, and the first Australian passport with an 'X' sex marker in 2003.[17]

The Asia Pacific Forum of National Human Rights Institutions states that the legal recognition of intersex people is firstly about access to the same rights as other men and women, when assigned male or female; secondly it is about access to administrative corrections to legal documents when an original sex assignment is not appropriate; and thirdly it is not about the creation of a third sex or gender classification for intersex people as a population but it is, instead, about self-determination.[27]

In March 2017, an Australian and Aotearoa/New Zealand community statement called for an end to legal classification of sex, stating that legal third classifications, like binary classifications, were based on structural violence and failed to respect diversity and a "right to self-determination". It also called for the criminalization of deferrable intersex medical interventions.[28][29]

Other scholars—especially Indigenous scholars—stress that mainstream scholars' lack of cultural understanding and context has led to widespread misrepresentation of third gender people, as well as misrepresentations of the cultures in question, including whether or not this concept actually applies to these cultures at all.[37][38][39][40]

Gender can be recognized and organized differently in different cultures. In some non-Western cultures, gender may not be seen as binary, or people may be seen as being able to cross freely between male and female, or to exist in a state that is in-between, or neither. In some cultures being third gender may be associated with the gift of being able to mediate between the world of the spirits and world of humans.[41] For cultures with these spiritual beliefs, it is generally seen as a positive thing, though some third gender people have also been accused of witchcraft and persecuted.[42] In most western cultures, people who do not conform to heteronormative ideals are often seen as sick, disordered, or insufficiently formed.[41]

The Indigenous māhū of Hawaii are seen as embodying an intermediate state between man and woman, or as people "of indeterminate gender",[43] while some traditional Diné of the Southwestern US recognize a spectrum of four genders: feminine woman, masculine woman, feminine man, masculine man.[44] The term "third gender" has also been used to describe the hijras of South Asia[45], the fa'afafine of Polynesia, and the Albanian sworn virgins.[46] 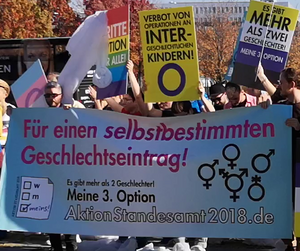 Aktion Standesamt 2018, a protest in support of a third gender, in front of the chancellery in Berlin. Marchers hold signs about intersex rights, transgender and nonbinary identity, and a legal third gender option.

In a study of people in the United States who thought themselves to be members of a third gender, Ingrid M. Sell found that they typically felt different from the age of 5.[47] Because of both peer and parental pressure, those growing up with the most ambiguous appearances had the most troubled childhoods and difficulties later in life. Sell also discovered similarities between the third genders of the East and those of the West. Nearly half of those interviewed were healers or in the medical profession. A majority of them, again like their Eastern counterparts, were artistic enough to make a living from their abilities. The capacity to mediate between men and women was a common skill, and third genders were oftentimes thought to possess an unusually wide perspective and the ability to understand both sides.[47] A notable result of Sell's study is that 93% of the third genders interviewed, again like their Eastern counterparts, reported “paranormal”-type abilities.[48]

The Open Society Foundations published a report, License to Be Yourself in May 2014, documenting "some of the world's most progressive and rights-based laws and policies that enable trans people to change their gender identity on official documents".[49] The report comments on the recognition of third classifications, stating:

The report concludes that two or three options are insufficient: "A more inclusive approach would be to increase options for people to self-define their sex and gender identity."[49]

One such term, Uranian, was used in the 19th century to a person of a third sex—originally, someone with "a female psyche in a male body" who is sexually attracted to men. Its definition was later extended to cover homosexual gender variant females and a number of other sexual types. It is believed to be an English adaptation of the German word Urning, which was first published by activist Karl Heinrich Ulrichs (1825–95) in a series of five booklets (1864–65) that were collected under the title Forschungen über das Räthsel der mannmännlichen Liebe ("Research into the Riddle of Man-Male Love"). Ulrich developed his terminology before the first public use of the term "homosexual", which appeared in 1869 in a pamphlet published anonymously by Karl-Maria Kertbeny (1824–82). The word Uranian (Urning) was derived by Ulrichs from the Greek goddess Aphrodite Urania, who was created out of the god Uranus' testicles; it stood for homosexuality, while Aphrodite Dionea (Dioning) represented heterosexuality.[55] Lesbian activist Anna Rueling used the term in a 1904 speech, "What Interest Does the Women's Movement Have in Solving the Homosexual Problem?"[56]

According to some scholars, the West is trying to reinterpret and redefine ancient third-gender identities to fit the Western concept of sexual orientation. In Redefining Fa'afafine: Western Discourses and the Construction of Transgenderism in Samoa, Johanna Schmidt argues that the Western attempts to reinterpret fa'afafine, the third gender in Samoan culture, make it have more to do with sexual orientation than gender. She also argues that this is actually changing the nature of fa'afafine itself, and making it more "homosexual".[57]

A Samoan fa'afafine said, "But I would like to pursue a master's degree with a paper on homosexuality from a Samoan perspective that would be written for educational purposes, because I believe some of the stuff that has been written about us is quite wrong."[57]

In How to become a Berdache: Toward a unified analysis of gender diversity, Will Roscoe writes that "this pattern can be traced from the earliest accounts of the Spaniards to present-day ethnographies. What has been written about berdaches reflects more the influence of existing Western discourses on gender, sexuality and the Other than what observers actually witnessed."[58]

According to Towle and Morgan:

Western scholars often do not make a distinction between people of the third gender and males; they are often lumped together. The scholars usually use gender roles as a way to explain sexual relations between the third gender and males. For example, when analyzing the non-normative sex gender categories in Theravada Buddhism, Peter A. Jackson says it appears that within early Buddhist communities, men who engaged in receptive anal sex were seen as feminized and were thought to be hermaphrodites. In contrast, men who engaged in oral sex were not seen as crossing sex/gender boundaries, but rather as engaging in abnormal sexual practices without threatening their masculine gendered existence.[60]

Some writers suggest that a third gender emerged around 1700 AD in England: the male sodomite.[2] According to these writers, this was marked by the emergence of a subculture of effeminate males and their meeting places (molly houses), as well as a marked increase in hostility towards effeminate or homosexual males. People described themselves as members of a third sex in Europe from at least the 1860s with the writings of Karl Heinrich Ulrichs[61] and continuing in the late nineteenth century with Magnus Hirschfeld,[50] John Addington Symonds,[51] Edward Carpenter,[52] Aimée Duc[53] and others. These writers described themselves and those like them as being of an "inverted" or "intermediate" sex and experiencing homosexual desire, and their writing argued for social acceptance of such sexual intermediates.[62] Many cited precedents from classical Greek and Sanskrit literature (see below).

Throughout much of the twentieth century, the term "third sex" was a common descriptor for homosexuals and gender nonconformists, but after the gay liberation movements of the 1970s and a growing separation of the concepts of sexual orientation and gender identity, the term fell out of favor among LGBT communities and the wider public. With the renewed exploration of gender that feminism, the modern transgender movement and queer theory has fostered, some in the contemporary West have begun to describe themselves as a third sex again.[63] Other modern identities that cover similar ground include pangender, bigender, genderqueer, androgyne, intergender, other gender, and "differently gendered".

In Wilhelmine Germany, the terms drittes Geschlecht ("third sex") and Mannweib ("man-woman") were also used to describe feminists – both by their opponents[64] and sometimes by feminists themselves. In the 1899 novel Das dritte Geschlecht (The Third Sex) by Ernst Ludwig von Wolzogen, feminists are portrayed as "neuters" with external female characteristics accompanied by a "crippled male psyche."

Retrieved from "https://nonbinary.wiki/w/index.php?title=Third_gender&oldid=30468"
Categories:
Hidden category:
Cookies help us deliver our services. By using our services, you agree to our use of cookies.