Parents of Gays float at the 2009 Marcha Gay in Mexico City. The banner shows the @ symbol substituted for the masculine "o" or feminine "a" to make it gender neutral.

Spanish has two grammatical genders, masculine and feminine. Like other Romance languages, it's very difficult to talk about a person in a gender-neutral way. This is because every adjective, noun, and article are all either masculine or feminine. It's difficult or even impossible to be completely gender-neutral in standard Spanish. However, feminists, LGBT people, and other activists today have made ideas for how to speak Spanish in a gender-neutral way when necessary. For example, it's now common for people to write "Latinx," "Latine" or "Latin@" as a gender-inclusive version of "Latino" and "Latina". For more information, see Wikipedia's article: Gender neutrality in Spanish and Portuguese. (Example)//

I guess if they're cool with it.

They will do it perself.

Elle ya sabe. (They already know)

• Sí misme/Elle misme/himself/herself (even the "self" suffix is gender polarized in Spanish: "Sí mismo/Sí misma or Él mismo/ Ella misma).

Preparó el café para sí misme. (Made that coffee to perself) Elle misme se hizo eso. (They did that to perself)

• Both "o" and "a" at the end of the words it's what let you know the specific gender for that case. In order to take gender out of the language, those vocals are replaced either by "e", "x" or "@". With time pass, the "e" solution has become the mainstream way to play, 'cuz it's the only of those options that can be actually used while speaking.

•There are some neutral-gender pronouns in Spanish that were not made for non-gendering speaking (as it's the "e" solution above), and can be pretty useful in various situations.

•There's also a common mistake among spanish speakers on the use of "la" or "lo" as the article for indirect complement, which shall be "le", the neutral one. This mistake is a consecuence of the use of those articles for the direct object.

•"Suyo". Means both his and hers. Ese muñeco es suyo. (That toy is theirs)

A sign explaining inclusive language in Spanish, at a feminist protest in Madrid, Spain, 2013. The sign suggests using an asterisk symbol * to substitute for masculine -o or feminine -a. 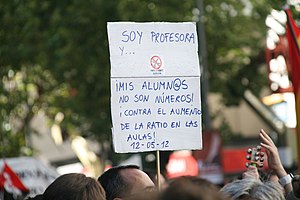 In Spanish, many nouns and adjectives end in either a masculine -o or a feminine -a. These same letters are also used in the grammatical gender of the definite articles. For example, niño bueno ("good boy") and niña buena ("good girl"); los amigos ("the friends," if the group has at least one man, or isn't known to be all women, although this can be used in a gender-neutral sense) and las amigas ("the friends," but only if the group is all women). Many people who want gender-neutral options for Spanish have had ideas for substituting these letters with something else that would make a word gender-neutral. These non-standard proposed alternatives are:

Like other languages in the Romance family, Spanish doesn't normally have neutral pronouns. However, people have created some new, neutral pronouns, which are used in some groups that are sensitive about LGBT, gender, and social justice issues. Most of these neutral pronouns work by taking the feminine pronoun, ella, and the standard abstract neuter pronoun ello (which can't be used for people), and substituting a different letter or symbol for the masculine "o" or feminine "a" ending. This approach of substituting a letter is shared by creating other parts of gender neutral language in Spanish, such as neutral-gender endings for adjectives. These new, neutral pronouns include:

elle. A neutral pronoun that can be easily said out loud. This is non-standard, but one of the most common of these.[8] It's used by nonbinary people in Chile.[9]

ell@. A neutral pronoun that can't be said out loud, or else is pronounced like "ellao". This is non-standard, but one of the most common of these. The @ (at symbol) is meant to be seen as a mix between an "a" and an "o".[8]

ele. A neutral pronoun that is a mix of the masculine pronoun él ("he") and a proposed gender-neutral ending letter, -e. This is less common. The plural would be elles.[10]

ell*. A neutral pronoun that can't be said out loud. This is less common. The * (asterisk) means that the "a" or "o" is left out. Compare the splat *e pronouns in English, which work by the same idea.[8]

ellæ. A neutral pronoun. This is less common.[8]

elli. A neutral pronoun that can be said out loud. It's uncommonly used.[8]

ellu. A neutral pronoun that can be said out loud. It's uncommonly used.[8]

ol. A neutral pronoun. Non-standard and uncommon. The plural would be olles. This would go with the non-standard definite article that is also ol.[10]

In Spanish, every noun is either female or male. None have a truly “neutral” grammatical gender. There are some kinds of nouns that come close to being gender-neutral in some ways: epicene nouns, common gender nouns, ambiguous gender nouns, and newly-made neutral or genderqueer nouns.

Some words, regardless of their own grammatical gender, are used for men and women alike, without changing the word's ending. Its article stays the same, too. (However, when these nouns are used for women, it's now acceptable in standard Spanish to optionally change to the feminine article.) These words are epicene (epiceno). This is the closest that standard Spanish gets to gender neutral language.

Some signs that a word is epicene:

A list of some epicene nouns in conventional Spanish:

There are also words with a "common gender" (común), meaning that the word itself stays the same whether it's applied to a man or woman, but its article changes gender to match the binary gender of the person to whom it is applied.

Some signs a noun is common gender:

A list of some common gender nouns in conventional Spanish:

Some words in Spanish aren't consistent in what grammatical gender they have. They've been used as feminine or masculine words depending on the place and time period. They may have one conventional version, plus an alternative gender that is used poetically or in archaic language. These words are rare. There are only about a hundred of them. They still mean the same thing even when their gender changes. (Unlike, say, la cometa "kite" and el cometa "comet.") They're called ambiguous nouns (nombres ambíguos en cuanto al género).

People have created new, non-standard nouns. Some are gender-inclusive (can be used for men, women, and nonbinary people). Some are only for people who identify as nonbinary or genderqueer.

One non-standard method for forming gender-inclusive and nonbinary nouns is by letter substitution, which is described above. This creates words such as:

Retrieved from "https://nonbinary.wiki/w/index.php?title=Gender_neutral_language_in_Spanish&oldid=30016"
Category:
Cookies help us deliver our services. By using our services, you agree to our use of cookies.