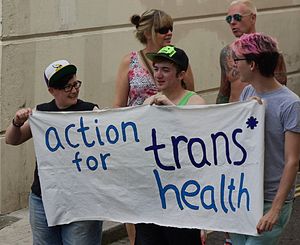 Many insurance plans exclude coverage for "services, drugs, or supplies related to sex transformation".[1] When prescribing HRT, some healthcare providers will get around this exclusion by entering the diagnosis as a hormone imbalance.

The Affordable Care Act and other USA laws prohibit sex-based discrimination, and in 2012, the Department of Health and Human Services clarified in a letter that this provision also covers "discrimination based on gender identity or failure to conform to stereotypical notions of masculinity or femininity".[4]

Starting January 1, 2019, the Blue Shield of California insurance company allows members to mark their gender identity as female, male, or nonbinary (in addition to marking their sex assigned at birth).[5]

In April 2018, new cards were issued to all Medicare beneficiaries, and the new cards no longer have a gender indicator.[6] However, Medicare's internal records will list the gender from beneficiary's Social Security data.[7]

For decades, Medicare did not cover transition surgery due to a policy that categorized such treatment as "experimental." That exclusion was eliminated in 2014[7], and now Medicare covers certain transition services that are deemed "medically necessary".[8] However, depending on where you live, your Medicare local contractor may have specific guidelines for coverage of transition-related care, and the beneficiary may have to file an appeal for services to be covered.[7]