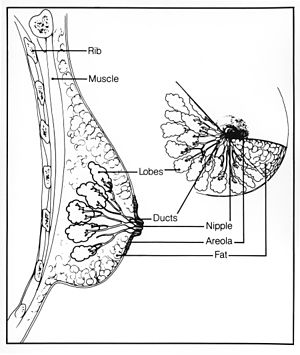 The anatomy of an adult's breast, as developed naturally and without surgery, whether from puberty or from estrogen hormone therapy.

Top surgery is a phrase used in the transgender community to mean a variety of kinds of gender-validating surgeries that can be done on the chest or breasts. This is as opposed to bottom surgery, which is any kind of gender-validating done on the reproductive organs or genitals. As with any kind of transgender people, some nonbinary people seek top surgery, some prefer not to. Top surgery is an option that a person can take on their transition path only if they personally want or need it. There are three main kinds of top surgery: making the breasts larger (breast augmentation), making the breasts smaller (breast reduction), or removing the breasts (mastectomy). It is each nonbinary person's own choice to get one of these, or none of these.

This page is written to use anatomically correct and yet gender-neutral language everywhere possible. This includes calling the surgery patient the "patient" or "person," rather than "woman" or "man," and calling the patient by "they" pronouns.

Some transgender and/or nonbinary people want to have breasts. For people who are developing breasts without having to take any hormone therapy, breasts can continue to grow during puberty until about the mid-20s. For people who take estrogen hormone therapy, this causes the exact same kind of breast development as happens naturally for women, just not necessarily at the same age. If either of these processes has finished, and the person still wants to have larger breasts than what they have, then they have a variety of options, non-surgical and surgical. They can temporarily make their breasts look larger by wearing a more supportive bra, a push-up bra, or padded bra. They can wear breast prostheses, also called fake breasts. For people who want to permanently make their breasts larger, then they have the option to get breast augmentation surgery.

There are several things one has to take into account when looking for breast augmentation surgery options:[1]

Some transgender and/or nonbinary people want or prefer to have a flat, masculine chest. For transgender children and teens, going on a prescription medicine called puberty blockers can postpone or pause puberty, which prevents or reduces the amount of breast growth they would have. The effects of puberty blockers are temporary, so breast growth will resume whenever the person stops taking that medicine. For people who have already had breast growth, going on hormone therapy such as testosterone may reduce breast size just a little bit, if at all, but it does not get rid of breasts. There are also nonbinary people who go on estrogen hormone therapy in order to get other body changes that they want, but who do not want breasts. Wearing a well-fitted sports bra or binder can reduce how large the breasts look, and temporarily make a flat, masculine chest shape. The only way to permanently get rid of breasts is through surgery. Surgery to take away the entire breast is called mastectomy. For transgender people, mastectomy is also called masculine chest reconstruction, to emphasize that they don't see it as a loss, but as fixing a problem.

Mastectomy for trans people is not as painful or traumatic as mastectomy to remove breast cancer or lumps, because the latter usually has to remove lymph nodes. For trans people, mastectomy is a short, single-stage procedure done under general anesthesia at a cosmetic surgery clinic or hospital. The patient goes home the same day. The recovery process depends on which method for mastectomy the patient had.

These are a few of the different methods for mastectomy. These options vary depending on what is possible or best for that patient's anatomy. They also vary from one surgeon to the next, since each has a specialty or a preferred method.[2]

After having a mastectomy/masculine chest reconstruction, the person is still able to get pregnant. If they do get pregnant, the person can experience swelling in the chest area and may possibly start lactating. These changes may be upsetting but they almost always go away after the pregnancy is over.[3]

Some transgender and/or nonbinary people who have not yet developed any breasts already know that they do not want to have any. If they can prevent their breasts from developing in the first place, then they will not have to get surgery to remove them. If someone knows that developing breasts would be a significant source of distress (gender dysphoria), then preventing breast development can be better for their longterm mental health.

Some transgender and/or nonbinary people have larger breasts than they want. If the temporary methods such as sports bras and binders do not meet their needs, then they may prefer to get surgery to reduce the size of their breasts. The variety of methods for breast reduction are very similar to those for mastectomy described above. Larger breasts or those that need to go down more sizes will be reduced by the T-anchor method. Breasts that only need to be a little smaller can be reduced by the peri-areolar or keyhole method.

Breast reduction is also commonly sought by binary men and women who seek a smaller breast area for a variety of reasons.[7]

One rare complication of breast surgery is that some or all of the areola or nipple skin can die during recovery. This leaves a blank, scarred, or pitted area of skin. This can happen to one or both nipples. A person can help prevent nipple loss by choosing a proficient surgeon, choosing a surgical method that keeps the nipple attached during the entire surgical process, and quitting smoking. Nipple loss is more common in mastectomy and masculine chest reconstruction, in which the nipple has been removed, divided, reshaped, and grafted back on during surgery. In masculine chest reconstruction, the nipple is also divided and reshaped, in order to make the nipples smaller and placed higher on the chest. Nipple loss can also happen to people who have had surgery to treat breast cancer, in which case it is not always possible to save the nipple.

For people who have lost one or both nipples, some non-surgical options to restore them include nipple tattooing, which recreates the color, but not the three-dimensional shape.[8] Although nipple tattooing is considered a medical tattoo, patients get aesthetically better and more realistic results by going to a professional tattoo artist than by having a doctor do the tattoo. Some artists offer nipple tattoos for free for breast cancer survivors.[9][10][11] Another non-surgical option is a nipple prosthesis, a realistic fake nipple temporarily glued to the skin.[12] Many prosthetic nipples are sold for women who survived breast cancer. There are also ones such as GenderMender prosthetic nipples for men, women, and nonbinary people, which are available in over 200 custom skin tones, and in smaller sizes that can look more appropriate on a masculine chest. Nipple reconstruction surgery recreates the three-dimensional shape of the nipple. Sometimes it uses a piece of skin from another part of the body to help create a raised shape.[13] Any of these treatments for nipple loss can help cover scars that might have come from breast surgery.

Retrieved from "https://nonbinary.wiki/w/index.php?title=Top_surgery&oldid=30590"
Category:
Hidden category:
Cookies help us deliver our services. By using our services, you agree to our use of cookies.