Earth. Puritan. Perhaps refers to Psalm 24:1, "The earth is the Lord’s, and all it contains, the world, and those who dwell in it."[2]

Easter. English. From the name of the holiday Easter.[3]

Easton. English. From the surname, from the place name, meaning "East town."[4]

Eddie Izzard at a Labour Party rally in 2015.

Ed. English and Dutch. Short form of many names containing Ed, including masculine names Edgar (English, French, Portuguese, and German, meaning "wealth" and "spear") and Edward (English and Polish, "rich guard"), and feminine names such as Edwina (English, meaning "rich friend"). More often masculine.[8][9][10][11] Variants: Eddi, Eddie, Eddy. Keywords: masculine inclined, one syllable, two syllables. Notable people with this name include English comedian Eddie Izzard (b. 1962), who goes by "he" or "she," depending on presentation.[12]

Elam. Arabic. From the place name in what is now the country of Iran, meaning "Highland."[28] Keywords: places, two syllables

Elicot, Elisot, or Elisotae. English. During the 1300s in England, these were neutral names. They were pet forms of the masculine name Elias.[31] Elias comes from Elijah.[32] Elijah, originally 'Eliyyahu (אֱלִיָּהוּ), is a masculine Biblical Hebrew name, meaning "My God is Yahweh."[33] Keywords: Christian, four syllables, medieval, three syllables.

Elie. French. Short form of many names starting with El (such as the feminine name Eleanor) or Eli (such as the masculine name Elijah).[34] Keywords: two syllables 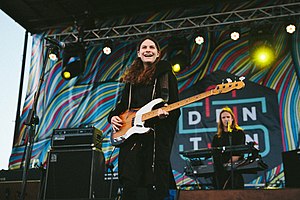 Elliot. English. From the given name Elijah, from the Biblical Hebrew given name 'Eliyyahu (אֱלִיָּהוּ), meaning "My God is Jehovah."[39][40] Variants: Eliot, Elliott. Keywords: Christian, religious, three syllables. Notable people with this name include the English musician Eliot Sumner (b. 1990), who when asked about their gender, replied that they simply identify as a musician.[41] Elliot Page, a famous nonbinary actor, also uses this name.

Ellis. English. From the given name Elijah, from the Biblical Hebrew given name 'Eliyyahu (אֱלִיָּהוּ), meaning "My God is Jehovah." The variants Ellis or Elis were names of some Christian saints, and so were popular names in the Middle Ages.[42][43] Keywords: Christian, religious, two syllables Sometimes also may reference a diety/sigil used in chaos magic(k)

Ephah or Eyphah (עֵיפָה). Hebrew. Meaning "Darkness" or "gloomy." The Bible uses this name for figures including a son of Midian and a concubine of Caleb.[3] Keywords: Biblical, inauspicious, two syllables

Erling. Scandinavian. Meaning "Descendant of the jarl." Jarl is an Old Norse word for an earl.[62][63] Keywords: two syllables

Errigal. Irish. From the name of a mountain in Ireland.[64] Places: mountains, nature, places

Etienne (pronounced ey-TYEN). French. From the name Stephen, meaning "Crown." In French-speaking areas, this is a masculine name, but in English-speaking areas, it's beginning to be used for girls as well.[77] In the USA, 93% of people with this name are boys.[78] Keywords: masculine inclined, royalty, two syllables

Ev. Various. Short for many names starting with "ev." 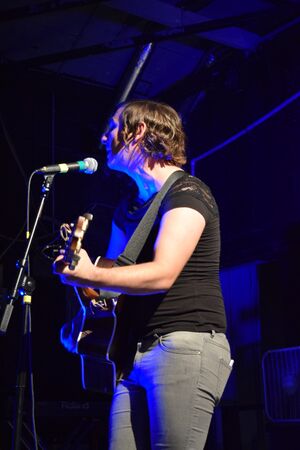 Evan Greer at the Boston Rock Against the TPP Concert in October 2016.

Evelyn. English and German. From the English surname Evelyn, from the Norman French given name. Meaning "Little Eve." In the 17th century, a masculine name; now more commonly a feminine name.[3][84]

Evren. Turkish. Meaning "Cosmos, the universe." Evren is the name of a dragon in Turkic mythology.[90] Keywords: mythology, two syllables

Exodus. Greek. Meaning "Exit of a large group of people," and the name of a book of the Bible.[92] Keywords: Biblical, three syllables

Retrieved from "https://nonbinary.wiki/w/index.php?title=Neutral_names_starting_with_E&oldid=32889"
Category:
Cookies help us deliver our services. By using our services, you agree to our use of cookies.