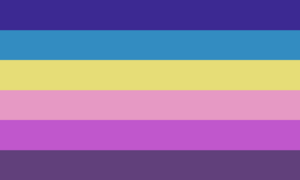 An Uranian pride flag posted in 2021.

Uranian, or Urning, is a term used during the 19th and early-20th centuries for a varying set of gender and sexual identities, originally with Mannling Uranians generally describing effeminate homosexual men, and Weibling Uranians describing people who were not assigned female at birth but whose gender identity and expression is female. Aside from Mannling and Weibling, several other sub-classifications of Uranians exist solely based on sexuality.[2]

Although the specific distinction between the sub-classifications of Uranians originally existed, by the early-20th century the original sub-classifications were rarely used, and Uranian on its own had broadened into an umbrella term for homosexual men, third gender people,[3] nonbinary people, and others.

In a book by Karl Heinrich Ulrichs from 1868, where where the term Urning (a German word from which the English "Uranian" is said to have derived) is first used, the separate term Urningin is proposed. This is defined as homosexual, assigned female at birth people who identify and express themselves in a generally-masculine way.[4] Urningin was rarely used however, and its meaning was (by the early-20th century) generally considered to fall within the range of meanings of Uranian on its own.

By the 1920s or 1930s, the term Uranian had fallen out of common usage, most likely due to a frequent lack of definition, general impreciseness, and the rise of other terms.

In the modern day, the term Uranian has seen a slight revival in usage by some members of the LGBT community in explaining sexual identity, as well as by some others to describe their gender identity.

Uranian is believed to be an English adaptation of the German word Urning, which was first published by activist Karl Heinrich Ulrichs (1825–95) in a series of five booklets (1864–65) that were collected under the title Forschungen über das Räthsel der mannmännlichen Liebe ("Research into the Riddle of Man-Male Love").

The word Urning was derived by Ulrichs from the Greek goddess Aphrodite Urania, who was created out of the god Uranus' testicles; it stood for homosexuality, while Aphrodite Dionea (Dioning) represented heterosexuality.[5]

Although Uranian is generally treated as an English translation of the German Urning, the term "Urning" (sometimes written uncapitalized as "urning"), taken directly from the original term in German, is occasionally used in English.

Ulrichs divided the term Uranian into two main sub-classifications pertaining to gender, the originally-written definitions of which from 1868 are below:

Later in his work, Ulrichs provides supposed specific homosexual preferences to which (according to him) all Mannling and Weibling Uranians are said to adhere. It must be remembered however that at the time of Ulrichs' coining of the term Urning, the word "homosexual" did not yet exist. The term "homosexuality" first appeared one year after the publication of Ulrichs' work in 1869 within a pamphlet published anonymously by Karl-Maria Kertbeny (1824–82). Because terms like homosexuality did not yet exist, Ulrichs resorted to using terms at his disposal, which in his case included terms he himself created (in this case also used to refer to gender identity), leading to sweeping generalizations such as these. Aside from Mannling and Weibling though, both of which could be used in the sense of someone's gender identity, Ulrichs also defined several more sub-classifications of Uranians solely related to sexuality.[6]

Some authors such as Havelock Ellis took issue with Ulrichs' terminology. Ellis only accepted Uranian as a term to describe third gender people and specific groups of homosexual men, refusing to acknowledge nonbinary people in general (other than those of a third gender).[3]

According to Ellis' interpretation of Ulrichs' works, social conditions leading to the concentration of men (schools, prisons, ships, etc.) lead to the emergence of Uranian "passions" from within certain individuals (although not everyone). These passions, are (at least more so) accepted by society solely because there is the expectation (through flawed logic) that upon the sight of women, these feelings will disappear. Because of the natural origin by which Uranian feelings exist, those feelings simply being downplayed and combated against in general society, Ulrichs states that societal acceptance of Uranians would do much more societal good than harm.[3]

Although significant work and literature regarding Uranians was done in Germany, laws criminalizing homosexuality (specifically under Paragraph 175 of the German legal code) caused the punishment of significant numbers of people identifying as Uranian throughout the entire time period during which the term was used. German legal author Prof. Ludwig Frey protested against these regulations, writing in his 1898 book Die Männer des Rätsels und der Paragraph 175 des Deutschen Reichsstrafgesetzbuches ("The Men of Riddles and Paragraph 175 of the German Imperial Criminal Code") that the state should stop punishing Uranians on account of their gender and sexuality:[7]

Lesbian activist Anna Rueling used the term in a 1904 speech, "What Interest Does the Women's Movement Have in Solving the Homosexual Problem?"[8]

Due to most people rejecting the legitimacy of Uranians' gender identity, very little scholarly work was conducted after Ulrichs' original work on the subject. In Prof. Frey's work regarding the legal challenges Uranians face, he created his own system of gender classification in order to explain their position between binary men and women. His classification puts human gender identity upon a spectrum, with Uranians encompassing an area between muliebrity (female attributes and identity) and virility (male attributes and identity).[7] Within the Uranian section of the spectrum, Ulrichs' sub-classifications could then be placed, solely on gender identity rather than sexuality. Prof. Frey's work, although extremely progressive for 1898, seems to interpret "Uranian" very broadly, almost in a sense similar to how nonbinary is used today. 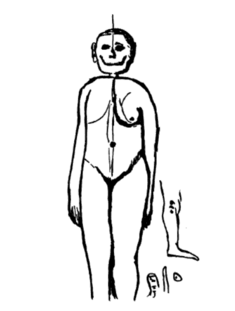 A drawing made by Adolf, a schizophrenia patient who identified himself as Uranian, when explaining his gender identity to the psychoanalyst Dudley Ward Fay in 1922.

In 1922, Dudley Ward Fay, a psychoanalyst, visited a hospital for mental illnesses where he came into contact with a person, diagnosed with schizophrenia, who identified himself as a Uranian. (Fay uses he/him pronouns in his work to refer to the individual.) As part of an agreement reached concerning publication, Fay refers to the individual as Adolf, withholding his true identity.[9] There was no correlation between Adolf's schizophrenia diagnosis and his gender identity, with both relating to Adolf simply being a coincidence. Both before experiencing any symptoms of schizophrenia, and being released from the hospital, Adolf is reported to have made remarks and conducted himself in ways not traditionally seen as completely masculine.

In an interview with his parents, Adolf was described as having "never cared much for rough and tumble play and was inclined to play indoors and read rather than mingle with studier boys outside."[10] During his late-teens, Adolf became romantically involved with several men, occasionally making remarks that less-masculine men were superior to more masculine ones. During this same period, many of his actions and decisions became more rash, eventually culminating in an episode of psychosis requiring hospitalization. During the first day of his hospitalization, Adolf revealed to his doctor that he was "of the intermediate sex (not strongly masculine)".[11] Resulting from his schizophrenia, many of Adolf's statements became progressively more unclear and nonsensical, although reflecting on his gender identity was a reoccurring theme:

By the fourth month of Adolf's observation by Fay, he seems to have identified more so as Uranian and/or female than any point previously. Many of Adolf's statements during his hospitalization were significantly affected by his schizophrenia, although upon his release, he still considered himself to be at least somewhat less male than his peers. Begun shortly before, and continued after his release, Fay attempted to pressure Adolf toward "trying to become male", which may be considered an attempt at nonbinary erasure.[14]

Also in 2021, a Discord server was created for Uranians & Urnings, as well as people questioning if they are Uranian/Urning, and people generally interested in LGBT history of the late 1800s to 1930s.[16]

Retrieved from "https://nonbinary.wiki/w/index.php?title=Uranian&oldid=31109"
Categories:
Cookies help us deliver our services. By using our services, you agree to our use of cookies.