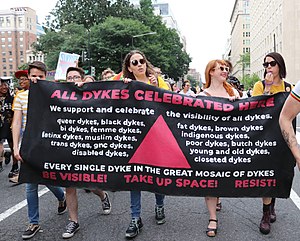 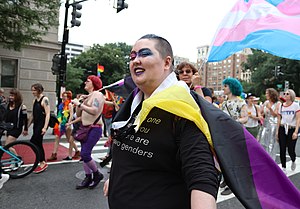 A nonbinary person at the 2019 DC Dyke March. 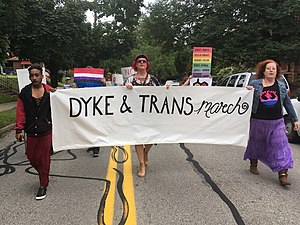 A photo of the 2018 Pittsburgh Dyke and Trans March. A genderfluid flag is visible behind the main banner.

The words dyke, dike, bulldyke or similar, commonly refer to a lesbian, particularly one with masculine or butch traits (although femmes can also be dykes[1]). The word is commonly considered a derogatory slur, but has been reclaimed and used positively by some lesbians.[2][3] Dyke is sometimes also used as an identity for non-lesbians, such as bisexuals or pansexuals.[1][4]

Dyke is not a label exclusive to binary women.[5] Notable nonbinary or genderqueer people who call themselves dykes include poet Eileen Myles[6], entrepreneur Al Sandimirova[7], and author Rivers Solomon.[8]

In the 2020 Gender Census, 89 respondents identified as a dyke, with an additional six people identifying as "dyke (in relation to gender)"/"dykegender"/"dyke-gender"/"dyke is my gender tbh", and several more as variants such as "dykeish", "dykefag", "boi dyke", "non-binary dyke", etc.[10]

The etymology of "dyke" is uncertain. Some hypotheses for its origin include:

A "Dyke March" is a visibility and protest march, much like a Pride parade. The concept began in the early 1980s, with a "Dykes in the Streets" march taking place in Toronto, Ontario in October 1981. It was organized by the now-defunct organization Lesbians Against the Right, and drew 350 participants.[13][14]

The first Dyke March named as such took place in Washington, DC, USA, on April 24, 1993, during the March on Washington for Lesbian, Gay and Bi Equal Rights and Liberation.[15] It was organized by the Lesbian Avengers, and had over 20,000 marchers.[16][17]

Nowadays, Dyke Marches take place during Pride Month in many cities across Canada, the USA, and Europe. Dyke pride flag by Jace.
Another dyke pride flag was created in February 2020 by a tumblr user named Jace (urls disastergay, frostwitch, agenderwitch, and plantbutch). The black background stands for the "power, strength, and freedom that comes with reclaiming dyke", as well as representing "any and all black wlw and black nonbinary sapphics who identify as dyke, as they have always been the backbone of this community." The purple stripe stands for reclaiming "dyke" from a violent slur into a positive identity label. The magenta stripe stands for unapologetic love of women. The pink stripe stands for acceptance of trans women, as well as inner peace. The white labrys axe represents "empowerment, justice, and intolerance of bigotry".[19] In October 2020, a person going by the online handle Catastrfy created another dyke flag. This flag has five horizontal stripes, which are blue (hex code #3e6aa9), white (#fefeff), golden brown (#c9a156), silver-gray (#c0c0c0), and black (#010100). The middle (golden brown) stripe is much narrower than the other four. Catastrfy said this about the flag's meaning:

Another dyke pride flag was created in 2021 by a disabled Latine xenogender dyke[21] named Sol Diaz. Fae wrote that "This flag refers to dyke as a reclaimed slur as well as a multi faceted identity, encompassing orientation, gender (ie dykegender), and culture."[22]

Retrieved from "https://nonbinary.wiki/w/index.php?title=Dyke&oldid=31697"
Category:
Hidden categories:
Cookies help us deliver our services. By using our services, you agree to our use of cookies.