Genderqueer, also called GenderQueer or gender queer, is an umbrella term that refers both to non-normative gender identity and gender expression. The label may also be used by individuals wishing to identify as holding queer or non-normative gender without being any more specific about the nature of their gender.

As an umbrella term, Genderqueer has a similar scope to nonbinary, with many nonbinary-identifying individuals also considering themselves genderqueer. However, the terms have different historical scopes and connotations. The word genderqueer was used at least ten years before nonbinary.

Genderqueer was coined in the 1990s as 'Gender Queer,' and was for a time written as 'GenderQueer' before becoming a single word. The original meaning was literally queer gender, including anyone who felt the way they experienced or expressed gender was queer. The term carries the non-normative and anti-assimilationist connotations of the Queer Movement and applies these to gender rather than sexuality.

Another early usage of the term was by Riki Anne Wilchins in the Spring 1995 newsletter of Transexual Menace:

Riki Wilchins' essay from the 2002 anthology GenderQueer describes how the original 'Gender Queers' adopted the label because the intended-to-be-inclusive umbrella term transgender had begun to be most strongly associated with transsexual, gender binary identified and medically transitioning people, pushing out those who did not fit this dominant transgender narrative.

By 1999/2000, online communities such as the Sphere mailing list were using the term genderqueer as an umbrella to unite a number of nonbinary gender identities and identifications that are now thought of as under the nonbinary umbrella. Over the next decade, genderqueer developed as a standalone identity with particular (sub)cultural expectations and connotations, while the tendency to identify particular experiences under its umbrella seemed to diminish. However both uses are still visible in different online and in person communities.

Difference between Genderqueer and Nonbinary

Genderqueer means non-normative or queer gender while nonbinary means gender that falls outside the gender binary model. Both of these terms are extremely similar in scope, however in practice their connotations are significantly different.

Genderqueer comes with the anti-assimilationist political connotations of queer, which is a reclaimed slur word with strong associations with a countercultural sexuality movement that sets itself apart from the mainstream LGBT community. (Note that the word "queer" is still actively used as a pejorative and hate speech in many regions.) As such genderqueer implies a similar counterculture, setting itself apart from mainstream transgender discourse. Most genderqueer people also consider themselves to be queer and there is a strong trend of rejecting the gender binary and normative gender roles with in the Queer Movement as a whole.

By contrast, nonbinary is more politically neutral in its connotations. Nonbinary was coined as a descriptive term, originally simply 'nonbinary gender', used to describe the range of experiences that fall outside of the binary gender model. There is no countercultural anti-transgender discourse connotation, nor is there a connotation of association with the wider Queer Movement. Nonbinary is intended to simply cover the widest range of identities and experiences without intending to describe their political or cultural philosophies and affiliations.

Observed differences between people who hold each identity

While genderqueer and nonbinary are theoretically extremely similar in their scope as umbrella terms, in practice genderqueer slants more towards those who identify as queering gender while nonbinary tends to attract those who hold specific trans* or transgender identities that fall outside of the gender binary.

Nonbinary-identified people generally seem more comfortable with considering themselves transgender and more likely to use the language of gender dysphoria. The adoption of the term 'nonbinary' by parts of the genderqueer community may reflect a trend of adopting the language of the transgender rights movement in order to make use of and expand on the legal protections now afforded to transgender people in some localities. Nonbinary-identified people may be more likely to be seeking access to transgender medical care or legal recognition (aka transition).

Some nonbinary people reject the term genderqueer as an umbrella term because they are offended to be associated with queer sexuality, or still see queer as an offensive word.

Despite these trends and connotations, both terms are used by some members of each group and so may be considered as wide inclusive umbrella terms. Some genderqueer-identified people have sought 'transition', some nonbinary-identified people hold binary gender identities and consider themselves to be nonbinary by gender expression, and it is currently common for nonbinary-identified individuals to also identify as genderqueer (especially as this term predates nonbinary by at least a decade).[citation needed]

There is controversy within the genderqueer community over whether genderqueer people fall under the transgender umbrella. Despite the work of Leslie Feinberg in the 1990s to coin transgender as a wide and inclusive umbrella term covering all forms of transgressive gender, the term genderqueer developed out of a frustration with the association between transgender and transsexualism, gender dysphoria and the dominant transgender narrative.[citation needed] 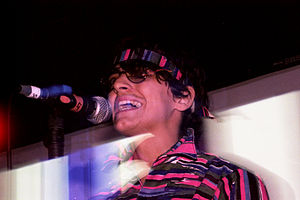 Some notable people who specifically describe themselves with the label "genderqueer" include:

There are many more characters in fiction who have a gender identity outside of the binary. The following are only some of those characters who are specifically called by the word genderqueer, either in their canon, or by their creators.

Retrieved from "https://nonbinary.wiki/w/index.php?title=Genderqueer/en&oldid=32376"
Categories:
Cookies help us deliver our services. By using our services, you agree to our use of cookies.