Femme is a term that refers to a queer person whose gender expression is considered to be feminine. It was originally used to distinguish feminine lesbian and bisexual women from butch women, and it is still one of the main uses of the term. It is common for trans and nonbinary individuals to use the term to refer to their identity or expression even if they do not identify as lesbian or bisexual women.[1] However, this last usage is has been gatekept by the lesbian community.[2] A common definition of femme is someone who queers or subverts femininity, as opposed to a butch person, who rejects femininity.[3] Femme is also sometimes used as a gender in itself.[4]

Some argue that the word femme[note 1] can only be used to describe people in the LGBTQ+ spectrum, and it can be a synonym of the expression lipstick lesbian in some cases. Because there are many stereotypes surrounding femininity, the term femme is often used to subvert cultural expectations about how a woman should look like. For this reason, many (but not all) people that identify as femme do not try to adhere to these stereotypes.[1] This is similar to how the word queer was reclaimed by the LGBTQ community. 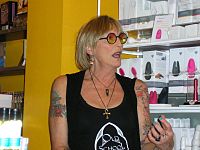 Retrieved from "https://nonbinary.wiki/w/index.php?title=Femme&oldid=33279"
Category:
Cookies help us deliver our services. By using our services, you agree to our use of cookies.