Flirtgender, which can also be known as Amogender or Genderamas is a gender that is connected to flirtiness. This can be thought of as flirting with people, or the world, or one's surroundings, or even flirting with gender itself.[1] 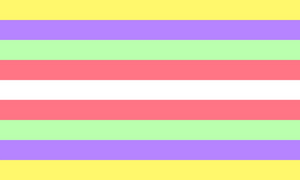 The colours on the flag are pastel and bright to represent flirtiness.[1]