Metoidioplasty or metaoidioplasty (informally called a meta) is a kind of surgery that some transgender and transsexual people seek.[1] It is sought by some transgender men, some trans-masculine people, some nonbinary people, and some intersex people. A meta surgery increases the exposed length of a person's phallus.[2] For people who have certain kinds of phallus (called either a large clitoris or small penis), a meta surgery frees the phallus from the tissues that hold it close to the body,[2][3] and pulls it outward, making its external size larger, so that it can be easier to use for penetrative sex. A patient has a range of different options for other details of this surgery, or procedures that can be done at the same time as this surgery, which are described below.

Metoidioplasty surgeries were developed in the 1970s. Since then, a variety of different methods for it have been developed by different surgeons.[3] 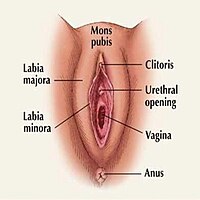 Diagram of the vulva. As seen in an adult who was assigned female at birth, and who has not had hormone therapy or surgery. 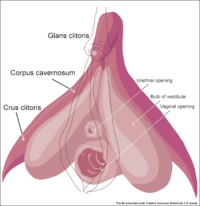 Diagram of the inner anatomy of the clitoris. As seen in an adult who was assigned female at birth, and who has not had hormone therapy or surgery.

In order to prepare for a meta, doctors prefer for the patient to first be on an appropriate hormone therapy (testosterone). When someone has been on testosterone hormone therapy for several years, this gradually enlarges the clitoris to a mean maximum size of 4.6 centimeters[4]. How much growth happens on hormones varies from one person to the next, and depends on their genes. Even without any kind of surgery or procedure, hormone therapy alone is enough to make a person's clitoris grow to be up to about the length of a thumb.[3] Without surgery, the clitoris is still tied down with skin, and partly buried in the body, so some people still find it difficult to use it to penetrate a sexual partner. Hormone therapy also doesn't make it easier for someone to pee standing up. Most surgeons recommend that patients should be on testosterone for at least six months to two years before getting a meta,[3] but it takes longer than that to have the most growth possible from testosterone. Having the largest size of clitoris that a person is able to have through hormone therapy makes it easier to do a meta. The surgeon usually advises the patient to prepare for a meta by using clitoral pumping on a regular basis in order to make the phallus bigger. However, there is no research yet as to whether pumping helps do that, and pumping does have a risk of causing injury.[2]

In the metoidioplasty surgery itself, the surgeon cuts some tissues that had held the clitoris down. They cut a ligament that holds the clitoris under the pubic bone. They also separate the clitoris from skin connected to it, such as the labia minora. The surgeon may take away some fat from the pubic mound, and pull the skin upward, in order to bring the phallus forward.[3]

Recovering from a metoidioplasty surgery may take up to two to four weeks,[2][3] in which the patient should limit their activity. During recovery, the patient may temporarily have a plastic catheter tube in their urethra that they need to pee through. Usually, this catheter will be taken out one or two days after surgery.[2] If the patient chose to have urethral lengthening, then the catheter may have to stay in for two to three weeks.[3]

After a metoidioplasty surgery, most people have a phallus that has a flaccid length between 3 and 8 centimeters.[2] A phallus created by a meta usually has full sensation, an ability to become erect naturally, an ability to orgasm,[2] and a look very much like a relatively small but natural and normal penis of a person who was assigned male at birth.[3] A meta doesn't leave any visible scars on other parts of the body.[3] For some people, a phallus from a meta is still not large enough for them to use to penetrate a sex partner.[3]

Metoidioplasty and phalloplasty are two very different methods for creating a larger phallus. Metoidioplasty is technically simpler than phalloplasty, costs less, and has fewer potential complications. However, phalloplasty patients are more likely to be able to use their phallus to penetrate a sexual partner after they recover from surgery, because phalloplasty can usually create a larger penis.[5]

In a phalloplasty, the surgeon creates a penis by grafting tissue from a donor site, such as from the patient's own back, arm, or leg, whereas a meta does not require any tissue grafts.[2] A phalloplasty takes about 8–10 hours to complete (the first stage), and is generally followed by multiple (up to 3) additional surgical procedures including glansplasty, scrotoplasty, testicular prosthesis, and/or penile implant. A meta takes less time, and typically requires 2–3 hours to complete. Because the clitoris's erectile tissue still works normally in a meta, a meta does not need a prosthesis implanted for erection, although the phallus might not become as rigid as the erection of a cisgender man. In nearly all cases, meta patients can continue to have clitoral orgasms after surgery.[citation needed]

Neither metoidioplasty nor phalloplasty make it so that a person can produce semen or get others pregnant. A procedure that gives someone those abilities does not yet exist.

Some patients choose to have an additional procedure in which their urethra will be extended through their phallus, called a "urethral hookup." This makes it so the person will be able to pee through their phallus, which makes it easier to pee while standing up. The surgeon can do a urethral hookup at the same time as a metaoidioplasty. There are two different methods for extending the urethra. One method takes a graft of skin from inside the patient's mouth. A newer method instead uses the inside of the labia and a flap from the vagina, which is called a "ring matoidioplasty."[2]

Here is one version of how a metoidioplasty can go, for a patient who chose to have their urethra extended so they will be able to pee through their phallus, and who chose to have a scrotum created (scrotoplasty). In a metoidioplasty, the urethral plate and urethra are cut away from the clitoral corporeal bodies, then divided at the distal end, and the testosterone-enlarged clitoris straightened out and elongated. A longitudinal vascularized island flap is configured and harvested from the dorsal skin of the clitoris, reversed to the ventral side, tubularized and an anastomosis is formed with the native urethra. The new urethral meatus (the hole you pee through) is placed along the phallus to the distal end and the skin of the phallus and scrotum reconstructed using labia minora and majora flaps.[6] The new phallus ranges in size from 4-10 centimeters (with an average of 5.7 centimeters), and has the approximate girth of a human adult thumb. [7]

These are some photos of a meta surgery. Not every meta will look like this, because people vary in which other genital surgeries they want to have with it.

If a metoidioplasty is performed without extending the urethra and/or creating a scrotum, this is sometimes called a clitoral release or a clitoral free-up.[3] A clitoral release by itself is less expensive than a "complete metoidioplasty" that includes these other procedures. By itself, a clitoral release has fewer health risks, because the urinary system remains unaltered without a urethral extension, and still affords some of the visual effects of a complete metoidioplasty, along with the ability to use the penis for sexual penetration. If the urethra is not changed from its original position, this does not allow for urination through the phallus, so this version of the procedure does not make it easier to pee standing up.[citation needed]

Retrieved from "https://nonbinary.wiki/w/index.php?title=Metoidioplasty&oldid=18099"
Categories:
Cookies help us deliver our services. By using our services, you agree to our use of cookies.