Tubal ligation, also called getting one's tubes tied, and sometimes used to mean a bilateral salpingectomy (destroying both fallopian tubes), is a form of sterilization. Any method of tubal ligation works by stopping the path the egg cell would travel through the fallopian tube to the uterus. For people who have a uterus, this procedure is meant to make it permanently virtually impossible for them to get pregnant. There are several methods of tubal ligation, but bilateral salpingectomy has come to be the preferred standard of care, because it is the most effective.[1] For some transgender and nonbinary people, if their only concern about their uterus is that a risk of pregnancy is a source of distress and body dissonance (called gender dysphoria), this is an alternative to removing the uterus (called hysterectomy).[2] Because this is not Wikipedia, this article should focus on common questions that transgender and nonbinary people have about this procedure, and should be written in simple English, so that people who are not doctors can easily understand it.

Tubal ligation has no effect on the person's menstrual flow, menstrual cycle, hormone balance, the ability to orgasm, vulnerability to sexually transmitted infections,[3] or when or how the person will go through menopause.[4] It does not elevate any cancer risks, and lowers ovarian cancer risk.[5][6] Sometimes a person can choose to have uterine ablation done at the same time as tubal ligation, which is supposed to stop menstrual flow. If someone chooses to get ablation, then they have to get a tubal ligation or some other kind of contraception too.[7]

There are various methods for tubal ligation, which can be considered either a laparoscopic surgery (meaning it is done by cutting only a few tiny holes on the lower belly, and putting long thin laparoscope tools through them to do the work), or a procedure (meaning it can be done without cutting into the body). The fallopian tubes (which connect the ovary to the uterus) can be blocked off by a variety of different methods. The tubes can be tied and cut (ligation), clipped, pinched off in a loop with a band, burned (cauterization), blocked with scar tissue or an implant (tubal occlusion), or completely destroyed (salpingectomy). Any of these methods can be called tubal ligation on paperwork and health insurance. Cutting or tying the tubes has the most risk of still being able to get pregnant, whereas destroying the tubes is the most effective at preventing pregnancy. Blocking the tubes with an implant can be done by putting it in through the vagina, without cutting into the body, which is safer,[7] but an implant has the risk of later traveling into parts of the body where it is not supposed to be, which can be harmful.

A diagram of the parts of an adult person's uterus, before any surgery. 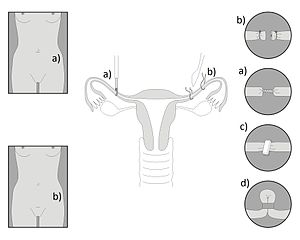 A diagram of some methods of tubal ligation.

Some regions have laws that make it so that a person has to be certain age before they are allowed to get a tubal ligation.[citation needed] Tubal ligation is done by written informed consent from the patient, without needing a diagnosis of any health problem.

Anyone seeking sterilization will encounter sexist discrimination. Doctors, local laws, and health insurance companies put many more obstacles in the way of sterilization for people who they perceive as female, because of a widespread misconception that everyone who was born with a uterus will want to get pregnant someday. By comparison, doctors are much more willing and cooperative about giving the equivalent sterilization procedure to people who have testicles (a vasectomy). A doctor will only let a patient sign the consent forms for tubal ligation in the first place if the doctor is satisfied with how the patient answers a long series of intentionally offensive questions. Doctors intentionally try to lead people into giving the "wrong" answers, and then refuse to let the patient sign the consent forms. A survey found that male and female doctors are equally reluctant to let a "young" person (in their 20s or 30s) get a tubal ligation. Looking too youthful or whimsical can be enough for the doctor to decide you don't look like you can consider this decision, so dress maturely for this appointment.[8] See sterilization for more details on what the doctor wants to hear. There is also racist discrimination involved: doctors make sterilization relatively easy to get for people of color, or even push it on people of color who don't want it, but make sterilization almost impossible to get for people who are white. The motivation behind this racist discrimination is eugenics. After signing these consent forms, the patient may be required to wait a certain number of days before being allowed to have surgery. The wait is to give the patient time to make sure it's what they really want. This is also sexist discrimination, because people seeking a vasectomy are not forced to wait.[3][9][10] Even after submitting the consent forms, the doctors usually continue to create obstacles, such as deciding that the consent forms need to be redone because the doctor didn't print their name below their signature, or canceling the surgery at the last minute because the patient didn't call to confirm that they still wanted it. Our wiki's article about sterilization tells more about how to navigate this form of sexist discrimination, find doctors who are willing to do it, and talk to them about it. As of this writing, some up-to-date resources for finding doctors who are willing to do a tubal ligation by the informed consent model include The Childfree Friendly Doctors List,[11] and Facebook's Childfree and Sterile/Seeking Sterilization group.[12]

During laparoscopic surgery, the surgeons put carbon dioxide gas into the abdominal cavity. This is to lift organs apart so that the surgeon can see what they're doing as they work. This is called insufflation of the abdomen. After surgery, the person's belly will still temporarily look enlarged (distended). This is the only particularly uncomfortable part of tubal ligation. During recovery, the person may feel pain in their shoulders, because the distended abdomen puts pressure on the muscles inside the top of the abdomen (the diaphragm), and the nerves refer that sensation to the shoulders.[14] The gas slowly goes away by being absorbed into the body, so in a few days, the belly will no longer look distended.

Out of pocket, a tubal ligation may cost between USD$1,500 and USD$6,000.[3] Most health insurance companies cover it, especially if they otherwise cover contraception. If cost is a obstacle, you may be able to lower it to suit your income level through a state program or a Planned Parenthood health center.[3] If a complication happens, it could cost much more. See also: Saving up for transition expenses.

During the surgery, there is a low risk that a bubble of air might get into a blood vessel (an embolism), which can cause the heart to stop (cardiac arrest). That can cause the patient to die on the operating table, but usually surgeons can restart the heart and resuscitate the patient.[16][17]

Tubal ligation does not increase the risk of cancer, not even hormone-sensitive types of breast cancer.[5] Tubal ligation correlates with a much lower rate of ovarian cancer.[5][18] 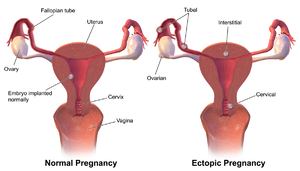 Some types of ectopic pregnancies in a uterus that hasn't had tubal ligation.

Most methods of tubal ligation are about 99% effective or greater in preventing pregnancy.[19] A pregnancy can happen if the fallopian tubes weren't fully cut, tied, blocked, or destroyed, or if the tubes later reconnected (recanalization), so that there was enough of an opening in the tube for an egg or sperm to pass through. If someone does get pregnant after a tubal ligation, then the embryo might implant somewhere wrong. This is called an ectopic pregnancy. Whether the embryo implants in the ovary (an ovarian pregnancy) or in the fallopian tube (a tubal pregnancy), the embryo generally can't survive,[20] For the pregnant person, an ectopic pregnancy is a life-threatening emergency that can only be fixed by removing the embryo (an abortion), which can sometimes only be done by surgery.[21] Worldwide, pregnancy happens after the cutting, tying, or blocking methods of tubal ligation in 1 in 200 cases; of those pregnancies, 1 in 10 of them were ectopic pregnancies.[22] However, the preferred method, salpingectomy, destroys the whole fallopian tubes, which makes it far safer for preventing pregnancies (ectopic or otherwise) than tubal ligation methods that only cut, tie, or block the tubes. There have only been two reported cases worldwide of any kind of pregnancy happening after bilateral salpingectomy.[23]

Retrieved from "https://nonbinary.wiki/w/index.php?title=Tubal_ligation&oldid=32486"
Categories:
Cookies help us deliver our services. By using our services, you agree to our use of cookies.