Shown here live at Øyafestivalen 2013, Raeen Roes, better known by their stage name Angel Haze, is a well known agender rapper, as they announced via twitter in February 2015.

Asia's first genderqueer pride parade in Madurai, 2012. The genderqueer flag can be seen here, with stripes of purple, white, and green. 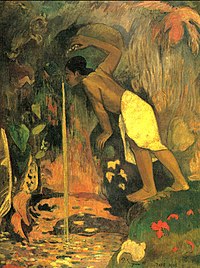 Papa Moe (Mysterious Water), an oil painting by the Westerner, Paul Gauguin, from 1893. It depicts a māhū in Tahiti drinking from a waterfall.[74][75]

Retrieved from "https://nonbinary.wiki/w/index.php?title=List_of_nonbinary_identities&oldid=32957"
Categories:
Hidden category:
Cookies help us deliver our services. By using our services, you agree to our use of cookies.